The dog who came in from the cold / Alexander McCall Smith. 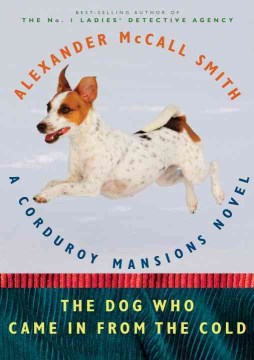 *Starred Review* Fans of McCall Smith are in roughly the same enviable position as fans of Dickens, Thackeray, and Trollope were in the nineteenth century. McCall Smith's novels are produced exuberantly and regularly, often with two or three delivered in the same year. And, like his Victorian forebears, two of McCall Smith's series (44 Scotland Street and the newer Corduroy Mansions) are serialized—the first, which is set in a mansion converted into flats in Edinburgh, runs in the newspaper The Scotsman, while the second, also set in a building of flats, appears in The Telegraph. Unlike Dickens and the others, though, McCall Smith ups the ante on serialization: his stories are produced daily rather than weekly or monthly. This second installment of Corduroy Mansions focuses on a cross section of residents, including young, hard-up flatmates and more settled inhabitants, like the literary agent Barbara Ragg, who is juggling love and a dubious manuscript supposedly dictated by the Abominable Snowman, and wine merchant William French, who agrees to lend his beloved Pimlico terrier to the service of the M16. A tracking device implanted in the dog's collar, after the dog is placed in the midst of a Russian spy ring, serves as a wonderful device for keeping suspense high throughout these interlocking stories. The second installment in the Corduroy Mansions series has much comedy and poignancy and a captivating dog-spy story. Brilliant. HIGH-DEMAND BACKSTORY: Yes, the Number 1 Ladies' Detective Agency is still McCall Smith's most popular series, but all the others are chugging right along, too. Any new entry in any of his series draws crowds of devoted readers. Copyright 2011 Booklist Reviews.

Smith's diverting second Corduroy Mansions novel (after Corduroy Mansions) focuses mainly on the misadventures of London wine merchant William French. When Angelica Brockelbank, an attractive acquaintance of William's he hasn't seen in years, unexpectedly shows up at his door in Pimlico, he's surprised to learn that, instead of running a bookshop, Angelica now works for Britain's MI6. He's further dumbfounded when an intelligence colleague of Angelica's asks him to eavesdrop on some Russian spies with his Pimlico terrier, Freddie de la Hay. The complications will elicit no more than smiles, though a passage toward the end about a notorious Margaret Thatcher quotation will raise a genuine laugh. Somewhat anemic characters, a silly subplot involving the autobiography of a yeti, and a lack of trenchant observations about human nature may disappoint those expecting the high quality of Smith's No. 1 Ladies' Detective Agency series. (June)

The bookshop on the cornerColgan, Jenny

The other side of the storyKeyes, Marian