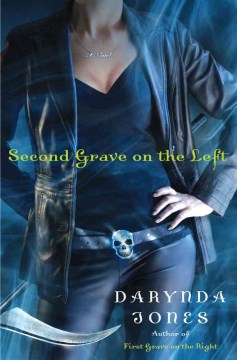 "The mysterious Reyes Alexander Farrow is stunningly handsome. He should be; after all, he is the son of the most beautiful, albeit fallen, angel. Charley Davidson looks like any other woman, even though she's the Grim Reaper. Souls pass through her to get to Heaven. However, before they leave this world, they have unresolved issues they want Charley to work out. Reyes has always been in love with Charley, and now he wants to destroy his corporeal existence to protect her. Charley would fight the very demons of hell to protect Reyes, but he's gone into hiding. In the meantime, graduates of a certain high-school class are dropping like flies, and Charley must find out why a ghost is plaguing a friend. Jones has created another winning story featuring her feisty, sassy sleuth. Filled with humor, sparkling dialogue, wonderful characters, and page-turning adventure, this second book in the series (First Grave on the Right, 2011) leaves the reader impatient for book three." Copyright 2011 Booklist Reviews.

As we learned in First Grave on the Right, winner in manuscript of the RWA 2009 Golden Heart for Best Paranormal Romance, P.I. Charley Davidson works part-time as a grim reaper, escorting the recently deceased upward. Here, she tracks down a missing woman while contending with love-interest Reyes, who happens to be the son of Satan and who's currently left his body behind. Seems that he'd like to avoid being tortured by demons wanting to use him to get to Charley, whom they see as a stepping stone to heaven. First Grave got some nice reviews, and this is getting a nice push, so listen up for fans who like fantasy, romance, and a bit of humor.

PI/Grim Reaper Charlotte "Charley" Davidson, who made a splash in her acclaimed debut, First Grave on the Right, returns in another comic paranormal mystery. In investigating the disappearance of Mimi, a friend of her business partner, Cookie, Charley has an advantage that most sleuths lack—she's able to communicate with the dead. Her investigations reveal that a number of Mimi's former high school classmates have disappeared or died, and the prime suspect is a U.S. senatorial candidate who may have something to hide. Meanwhile, Charley's relationship with sexy Reyes Farrow (also known as the Son of Satan) continues to develop. Reyes has a lot of secrets, but he's about to reveal something so startling that even the Grim Reaper has a tough time accepting it. VERDICT The Grim Reaper angle makes this an obvious choice for urban fantasy/paranormal fiction readers, but the blend of humor, heat, rapid-fire dialog, and suspense brings to mind a paranormal Stephanie Plum. Charley's second adventure ends on a cliff-hanger, so there's certain to be more to come. [See Prepub Alert, 2/21/11.]—Nanette Donohue, Champaign P.L., IL

Jones perfectly balances humor and suspense in her tight second paranormal thriller featuring grim reaper, PI, and "all-around badass" Charley Davidson (after First Grave on the Right). In separate cases, smart-mouthed Charley pursues two missing persons by using a mix of ghostly informants, family police contacts, quick thinking, and just plain luck. The first, Mimi Jacobs, disappeared just as several of her old high school classmates met untimely deaths; the second, Charley's frustrating but sexy sometimes stalker and occasional lover, Reyes Farrow, who's literally the son of Satan, decided to permanently leave his body to demons and live in the immaterial realm. To complicate Charley's quest, Reyes has hidden his body so she can't find it. The fiery relationship between Charley and Reyes will satisfy paranormal romance fans, but it's the distinctive characters, dead and alive, and the almost constant laughs that will leave readers eager for the next installment. (Aug.)

One for the moneyEvanovich, Janet

You slay me: an Aisling Grey, Guardian, novelMacAlister, Katie