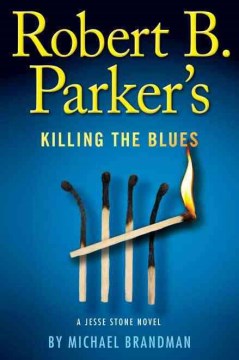 There's something unseemly and exploitative about this book's cover, which has "Robert B. Parker" emblazoned at the top, in the largest letters, with the actual author, Michael Brandman, presented in small print at cover's bottom. It's an obvious attempt to fool fans into buying the book, hoping that Parker, who died last year, left one behind. Brandman, a Parker collaborator (on the Spenser and Jesse Stone TV series), may be a talented author in his own right (and this mystery reads at least as well as Parker's unusually terse Stone books), but he isn't Parker. What the novel does have going for it, however, is a mystery that builds to a very satisfying and shocking resolution. Stone, the police chief of Paradise, Massachusetts, is beset by a string of car thefts during tourist season. Then a car owner is murdered. The dialogue often consists of one-word paragraphs, a device that gets old really quickly. The Stone series, as written by Parker, was always a cut below the Spenser series. Brandman's effort, if read on its own merits, is strong on plotting but derivative on everything else. Copyright 2011 Booklist Reviews.

With summer just weeks away, Chief of Police Jesse Stone is pretty tense—and not just because Paradise, MA, is gearing up for the tourists. Stone finds himself dealing with car thefts, then murder, then someone who's come to town to remind him of his not-so-happy past as an L.A. cop. Fans mourning Parker's death will be happy to see that Brandman, who has written and produced numerous TV movies based on Parker's novels, has picked up where the best-selling author left off.

Brandman, who collaborated with Robert B. Parker (1932–2010) on TV adaptations of his work, perfectly reproduces Parker's style in this impressive continuation of his series featuring Paradise, Mass., police chief Jesse Stone. A series of auto thefts is plaguing the small Massachusetts town just as the profitable summer tourist season is about to kick off. More alarmingly, Stone's former boss with the LAPD, Captain Cronjager, phones to warn him that a criminal Stone once roughed up "pretty good," Rollo Nurse, has been paroled from California's Lompoc prison due to budget cuts and may come gunning for him. The ending may tie up loose ends a little too neatly, and Stone is a bit slow off the mark with one of his professional challenges, but as with the originals, the pleasure lies more in the easy, banter-filled writing, balanced with the lead's apparently limitless compassion, informed by bitter experience, than in the plot itself. (Sept.)