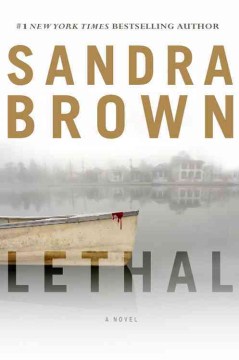 "Lee Coburn is lethal. A trained killer suspected of murdering seven men in a trucking company warehouse in coastal Louisiana, he is the object of an area-wide manhunt when he feigns injury to get into the home of widow Honor Gillette and her four-year-old, Emily. The Gillette house isn't just a refuge for Coburn. He's after something valuable left by Honor's late husband, Eddie, a cop who died in an apparent accident two years ago. As the terrorized Honor fears for Emily's safety and expects to be raped or murdered, it becomes clear that things aren't what they seem. Everything revolves around the Bookkeeper, shadowy head of a scheme for illegally trafficking guns, drugs, and girls, who brooks no deviation from orders given. Though it's fairly obvious early on that Honor is drawn to Coburn's laser blue eyes, Brown keeps the plot twisting and turning, the body count rising, and the action accelerating to a satisfying climax. Brown knows how to write romantic suspense and once again has produced a satisfying page-turner." Copyright 2011 Booklist Reviews.

Told by her four-year-old that there's a man in the yard who needs help, Honor rushes out to find Lee Coburn, who stands accused of murdering seven people the night before. He also says that Honor's late husband has something that he wants—something so dangerous that she'll be glad to dump it. Brown has not slowed down; buy multiples.

Honor Gillette, the widow of a coastal Louisiana police officer, goes from frosting cupcakes to being held hostage when armed, accused murderer Lee Coburn invades the home where she lives with her four-year-old daughter, Emily. Lee says he's looking for something important that was kept by her late husband, but Honor can't imagine what it is or why a dangerous man like Lee wants something from her good cop husband. As her ordeal continues, Honor doesn't know whom to believe or trust but only that she needs to do whatever is necessary to keep Emily and herself alive. VERDICT Fast paced and full of surprises, this taut thriller, marking the author's return to Grand Central, features a large cast of superbly drawn characters and the perfect amounts of realistic dialog and descriptive prose. Brown (Tough Customer), who began her career writing romance novels, also adds palpable romantic tension to the proceedings. Public libraries should expect high demand. [See Prepub Alert, 3/21/11.]—Samantha J. Gust, Niagara Univ. Lib., NY

At the start of this pulse-pounding thriller from bestseller Brown (Tough Customer), Honor Gillette is baking cupcakes in the kitchen of her Tambour, La., home when her four-year-old daughter, Emily, tells her a bloodied man is outside in the yard. Lee Coburn is on the run, the object of a manhunt for the cold-blooded murder of seven people, including one of Tambour's most prominent citizens. Promising not to harm Emily, Lee takes Honor hostage, but only because she may have the key to solving an even bigger puzzle: the identity of the Bookkeeper, a criminal mastermind with power over local law enforcement and government. Honor's policeman husband, Eddie, who died in an accident two years earlier, may have had information about the mysterious and malicious Bookkeeper. When it becomes apparent that the mass murders and Eddie's death might be connected, trying to prove the link could cost Lee and Honor their lives. A relentless pace and clever plot twists keep the pages turning. (Sept.)

Are you afraid of the dark?Sheldon, Sidney

Cleaning the gold: a Jack Reacher and Will Trent short storySlaughter, Karin, 1971-