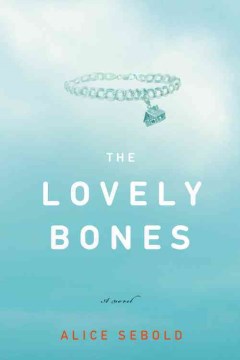 Few novels, debut or otherwise, are as masterful or as compelling as Sebold's. Her heroine, 14-year-old Suzy Salmon, is murdered in the first chapter, on her way home from school. Suzy narrates the story from heaven, viewing the devastating effects of her murder on her family. Each member reacts differently: her gentle father grieves quietly, intent on finding her killer; her aloof mother retreats from the family; her tough younger sister, Lindsey, keeps everything inside, except for the occasional moment when she tentatively opens up to her boyfriend; and her four-year-old brother, Bucky, longs for his older sister and can't comprehend her absence. Suzy also watches Ray Singh, the boy who kissed her for the first time, who represents all of her lost hopes, and Ruth Connors, who became obsessed with death and murder after Suzy's passing. Under Suzy's watchful eye, the members of her family individually grow away from her murder, each shaped by it in their own way. In heaven, Suzy herself continues to grapple with her death as well, still longing for her family and for Earth, until she is finally granted a wish that allows her to fulfill one of her dreams. Sebold's beautiful novel shows how a tragedy can tear a family apart, and bring them back together again. She challenges us to re-imagine happy endings, as she brings the novel to a conclusion that is unfalteringly magnificent. And she paints, with an artist's precision, a portrait of a world where the terrible and the miraculous can and do co-exist. ((Reviewed May 1, 2002)) Copyright 2002 Booklist Reviews

The heroine of Sebold's first novel (after the memoir Lucky) is already dead, but that doesn't keep her from talking. Teenager Susie Salmon looks down benevolently from Heaven as her family heals and her murderer is run to ground. Copyright 2002 Cahners Business Information.

Sebold, whose previous book, Lucky, told of her own rape and the subsequent trial of her attacker, here offers a powerful first novel, narrated by Susie Salmon, in heaven. Brutally raped and murdered by a deceptively mild-mannered neighbor, Susie begins with a compelling description of her death. During the next ten years, she watches over her family and friends as they struggle to cope with her murder. She observes their disintegrating lives with compassion and occasionally attempts, sometimes successfully, to communicate her love to them. Although the lives of all who knew her well are shaped by her tragic death, eventually her family and friends survive their pain and grief. In Sebold's heaven, Susie continues to grow emotionally. She learns that human existence is "the helplessness of being alive, the dark bright pity of being human feeling as you went, groping in corners and opening your arms to light all of it part of navigating the unknown." Sebold's compelling and sometimes poetic prose style and unsparing vision transform Susie's tragedy into an ultimately rewarding novel. Highly recommended for academic and public libraries. [Previewed in Prepub Alert, LJ 3/15/02.] Cheryl L. Conway, Univ. of Arkansas Lib., Fayetteville Copyright 2002 Cahners Business Information.

Sebold's first novel after her memoir, Lucky is a small but far from minor miracle. Sebold has taken a grim, media-exploited subject and fashioned from it a story that is both tragic and full of light and grace. The novel begins swiftly. In the second sentence, Sebold's narrator, Susie Salmon, announces, "I was fourteen when I was murdered on December 6, 1973." Susie is taking a shortcut through a cornfield when a neighbor lures her to his hideaway. The description of the crime is chilling, but never vulgar, and Sebold maintains this delicate balance between homely and horrid as she depicts the progress of grief for Susie's family and friends. She captures the odd alliances forged and the relationships ruined: the shattered father who buries his sadness trying to gather evidence, the mother who escapes "her ruined heart, in merciful adultery." At the same time, Sebold brings to life an entire suburban community, from the mortician's son to the handsome biker dropout who quietly helps investigate Susie's murder. Much as this novel is about "the lovely bones" growing around Susie's absence, it is also full of suspense and written in lithe, resilient prose that by itself delights. Sebold's most dazzling stroke, among many bold ones, is to narrate the story from Susie's heaven (a place where wishing is having), providing the warmth of a first-person narration and the freedom of an omniscient one. It might be this that gives Sebold's novel its special flavor, for in Susie's every observation and memory of the smell of skunk or the touch of spider webs is the reminder that life is sweet and funny and surprising,. Agent, Henry Dunow. (July 3) Forecast: Sebold's memoir, Lucky, was the account of her rape in 1981, at Syracuse University. It is, of course, impossible to read The Lovely Bones without considering the memoir, but the novel moves Sebold effortlessly into literary territory. A long list of writers including Michael Chabon and Jonathan Franzen blurb The Lovely Bones, and booksellers should expect the novel to move quickly; the early buzz has been considerable. Foreign rights have been sold in England, France, Germany, Holland, Italy, Japan, Norway, Spain and Sweden, with film rights to Film Four. Copyright 2002 Cahners Business Information.

The age of miraclesWalker, Karen Thompson