The corn maiden and other nightmares / Joyce Carol Oates. 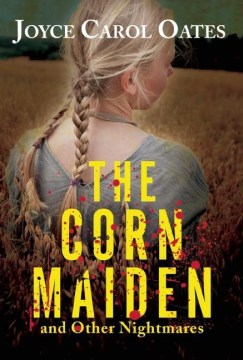 Vulnerability is the key to gripping suspense and one of Oates' core themes. In her newest, exceptionally shrewd and gripping assemblage of "nightmares," Oates offers erotically charged, disturbingly counterintuitive variations on the symbiosis between hunter and prey. A man weakened by alcoholism, diabetes, and bad relationship karma answers the phone to hear a sexy, vaguely familiar voice extending what turns out to be a catastrophic invitation. "Helping Hands," cousin to the widow stories in Oates' watershed collection, Sourland (2010), portrays with searing detail wealthy Helene, who, so addled and desperate in the wake of her husband's unexpected death, becomes masochistically enamored of an enraged, disabled veteran working at a charity thrift shop. In the riveting yet nuanced novella "The Corn Maiden," Marissa, a pretty but "slow" 11-year-old, disappears. As the case dominates television news, a teacher becomes a hated suspect, while a diabolical older girl and her followers hold Marissa captive. In each astute, creepy, nearly paralyzing tale of longing, malevolence, and calamity, Oates extends her tireless exploration deep into the darkness of damaged and criminal psyches, a realm of terrible power. HIGH-DEMAND BACKSTORY: The incomparable Oates' readership continues to grow following her memoir, A Widow's Story (2011), while her standing as a master of suspense rises. Copyright 2011 Booklist Reviews.

In the title novella, a somewhat slow 11-year-old girl with corn-silk hair goes missing; three older girls have enticed her into a basement, there to enact a ghastly ritual. Oates can really creep us out in literate fashion; for all chill seekers.

Oates's latest collection features six previously published stories and the debut of a new tale, "Helping Hands." The title novella revolves around the kidnapping of 11-year-old Marissa by her classmates. In chilling detail, Oates examines the mindset of not only Marissa's single mother, who was out late with a man, but also the kidnapping's mastermind, who is obsessed with the Indian legend of the Corn Maiden in which a young girl is sacrificed to ensure a good crop, and the teacher who is implicated in Marissa's disappearance. Two stories, "The Death Cup" and "Fossil Figures," involve twin brothers and how their lives are inextricably linked. VERDICT Psychologically compelling and disturbing, this volume is a strong addition to Oates's vast body of work. Short story readers and Oates fans will enjoy it. [See Prepub Alert, 5/9/11.]—Kristen Stewart, Brazoria Cty. Lib. Syst., Pearland, TX

The seven stories in this stellar collection from the prolific Oates (Give Me Your Heart) may prompt the reader to turn on all the lights or jump at imagined noises. In the excruciating title tale, a novella subtitled "A Love Story," an adolescent girl leads two of her friends in the kidnapping of 11-year old Marissa Bantry to enact the ritual sacrifice of the Corn Maiden as performed by the Onigara Indians. Children or childhood traumas play significant roles in "Beersheba," in which a man's past catches up to him, and "Nobody Knows My Name," in which the birth of a sibling turns nine-year-old Jessica's world upside down. Twins figure in both the eerie "Fossil-Figures" and the harrowing "Death-Cup" with its sly allusions to Edgar Allan Poe's "William Wilson." In "A Hole in the Head," a plastic surgeon succumbs to a patient's request for an unusual operation with unexpected results. This volume burnishes Oates's reputation as a master of psychological dread. (Nov.)