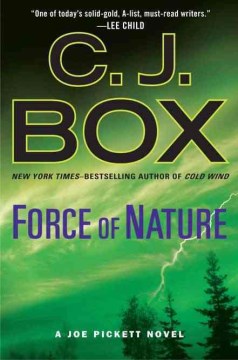 *Starred Review* Some sidekicks provide comic relief, while others serve a darker purpose. Think Easy Rawlins and Mouse or Elvis Cole and Joe Pike—the ego and the id. In Box's Joe Pickett novels, off-the-grid free-agent Nate Romanowki plays a similar role: Joe is a family man, while Nate is a loner; Joe is a poor shot, but Nate is deadly accurate; Joe is rational, while Nate is a force of nature. In some ways, the blood on Nate's hands allows Joe to remain the sympathetic hero. In the twelfth series installment, Nate takes center stage. His mysterious past has caught up with him, and the black-ops military unit to which he used to belong wants him dead. They're going after Nate through the people he cares about, including Joe's family. This is a very different Pickett novel, more a pure thriller and much more violent. Fans who love the books for their thoughtfulness may find this one a bit bloody, but those who love Box's stunning set pieces will be in heaven. And, as a way to keep the series fresh, it's an excellent idea—we all need to let our ids off the leash once in awhile. Copyright 2012 Booklist Reviews.

Set just weeks after fugitive Nate Romanowski's double loss of his lover and a trusted ally (Cold Wind), Nate realizes that his former Air Force mentor is hunting him down and systematically eliminating all his known associates. A bloody confrontation along the Twelve Sleep River injures Nate and sets the tone for a series of violent attacks stretching from Colorado into Wyoming and Idaho. Getting ever closer to Nate's best friends, game warden Joe Pickett and his wife Marybeth, the killer taunts his intended victims. Nate, up against a skilled falconer, expects only the worst outcome, but still he perseveres. And Joe, always honorable, plans to save Nate's life, no matter what it takes. VERDICT The 12th Joe Pickett novel focuses on the enigmatic Nate, whose story mirrors some of the sweeping changes brought on by 9/11 and the subsequent wars. Edgar-winner Box has written an exquisitely designed, six-act mystery that uses falconry for its central metaphor without ever losing the necessary thrust to make this an absolutely riveting read. This is the best Box I've ever read, and I've read them all. Recommend to fans of Lee Child's The Affair. [See Prepub Alert, 9/19/11.]

Fugitive Nate Romanowski's rogue past returns to haunt him as cold-blooded assassins pursue him over three states, ending up in game-ranger Pickett's Wyoming backyard. With falconry as a running metaphor, this is a stunningly fresh entry in a long-running series. (LJ 3/1/12) (c) Copyright 2011. Library Journals LLC, a wholly owned subsidiary of Media Source, Inc. No redistribution permitted.

Edgar-winner Box's breakneck 12th Joe Pickett novel (after 2011's Cold Wind) focuses on Joe's outlaw buddy, Nate Romanowski. Nate's been hiding in the foothills of Wyoming's Bighorn Mountains from cruel and powerful enemies, harmlessly communing with his falcons, except when assisting game warden Joe on a case. Unfortunately, Nate's sociopath former Special Forces commander, John Nemecek, a fellow falconer, comes after him with merciless efficiency and a crew of fanatical thugs, and Nate responds with measured but startling ferocity. When Nemecek begins interrogating—and eliminating—people connected to Nate, Joe's family members become targets, forcing Joe to decide how far he can go to help his friend. The struggle between loyalty and law has always been at the heart of this series, set far from big-city legal support systems, and it's especially impressive in this superior entry. Author tour. Agent: Ann Rittenberg, Ann Rittenberg Literary Agency. (Mar.)