Beneath a meth moon : an elegy / Jacqueline Woodson. 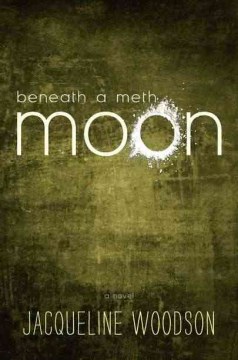 Woodson's first YA offering since After Tupac and D Foster (2008) will not disappoint readers. Fifteen-year-old Laurel is living a post-Katrina nightmare—having lost her mother and grandmother in the storm—but, after moving to Galilee, Mississippi, she's faring better: she has a best friend, a spot on the cheerleading squad, and an athlete boyfriend, T-Bone. Then T-Bone introduces her to meth, or "the moon," named for the lightness and nothingness it brings, and her painful past is gone. Woodson deftly cycles back and forth between events surrounding the storm and Laurel's drug-addicted life on the street. In a short preface, Laurel writes that this story is her personal "elegy to the past," and narrative techniques—such as weaving italicized thoughts and conversations seamlessly into the text—create the intimate sense of reading a journal. A slim but affecting novel, this ends on a hopeful note: perhaps it is possible to write pain "into the past and leave some of it there," and reimagine a future. HIGH-DEMAND BACKSTORY: Woodson returns to her YA roots here. With legions of built-in fans and plans for extensive social-networking/blogger outreach, there's sure to be a lengthy waiting list for this one. Copyright 2011 Booklist Reviews.

Two years after Hurricane Katrina takes Laurel's mother and grandmother, she, her father, and brother move to Iowa, where she finds new friends and a boyfriend--and meth. Laurel's descent into addiction is brutally honest and narrated in her lilting, Southern cadence. Linking the large-scale tragedies of Katrina and drug addiction, the novel tells an intimate and compelling story of survival.

Woodson takes us on the dark journey of addiction, mimicking the slow, hazy spell of drug use with the lull of her poetic prose. Laurel's happy childhood on the Gulf shore ends abruptly when Hurricane Katrina destroys her city of Pass Christian, Mississippi, taking her mother, grandmother, and house. After two years of refuge with an aunt, Laurel, her father, and her baby brother move north to the small town of Galilee, Iowa. With new friends, cheerleading, and a basketball star boyfriend, a new life seems possible. T-Boom's affections feel like home to Laurel, and she trusts this good feeling when he offers her first sniff of meth, just to warm her up on a cold night. Laurel loves the way "the moon" fills up her head "with so many different beautiful things" and washes the painful past away. How does a pretty, popular cheerleader become an addict? Just that easy, Woodson shows us. Laurel's descent is brutally honest: wasted and shivering in the cold rain with burnt and bleeding lips, she craves only more meth to soothe the pain. Laurel narrates her own story in a lilting, Southern cadence. Woodson uses biblical references boldly and effectively, as though proclaiming the magnitude of her characters' trials. For instance, the water rises to take Laurel's home and family in Pass Christian, while the sign for their new city reads: "Welcome to Galilee, where life is a walk on water." Laurel's recovery will take no less than such a miracle. Linking the large-scale tragedies of Katrina and meth addiction, the novel tells an intimate and compelling story of survival. lauren adams Copyright 2012 Horn Book Magazine Reviews.

Fifteen-year-old ex-meth addict Laurel is writing an "elegy to the past" in an attempt to recover her life. After her mother and grandmother die in Hurricane Katrina, Laurel, her father, and her younger brother, Jesse Jr., move from their temporary new home in Jackson, Miss., to Galilee, Iowa, for a fresh start. Laurel makes a new friend, joins the cheerleading squad, and begins dating star athlete T-Boom, but she is still bereft over her lost family. When T-Boom offers her a taste of "the moon" (meth), her sadness evaporates. "Thing about the moon is—it takes you deeper," Laurel says. "Deeper than you'd go on your own." She quickly becomes addicted, neglects her friends and family, and winds up begging on the street in pursuit of more. Woodson's (Peace, Locomotion) dreamlike story is constructed of Laurel's patchy memories peppered with the voices of expertly sketched characters and rich with writerly observations. While readers know that Laurel survives, Woodson maintains tension throughout, making it abundantly clear how easy it is to succumb to meth and how difficult it is to recover from it. Ages 12–up. (Feb.)