Sidney Chambers and the shadow of death / James Runcie. 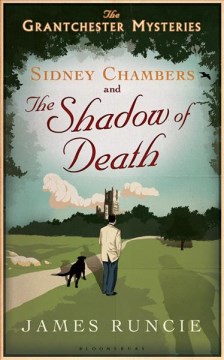 There is something very appealing about a man of the cloth playing at detective; the convergence of the sacred with the evils of the modern world can make for delightful mystery reading. Novelist Runcie (The Discovery of Chocolate; Canvey Island), who just happens to be the son of the former archbishop of Canterbury, has bestowed upon us a new and delightful clerical detective. Canon Sidney Chambers is a relatively young vicar with a passion for jazz and backgammon who resides in the quintessential English village of Grantchester. This reluctant shamus continually finds himself embroiled in a variety of mysteries from outright murder to a jewel heist. Fortunately, Sidney has a stalwart companion in Insp. Geordie Keating, who also serves as his drinking and backgammon partner. VERDICT This is a strong series debut with an affable amateur detective set against a post-World War II England that is both evocative and informative. A gentle mystery read with strong appeal for devotees of ecclesiastical and English village mysteries.—Amy Nolan, St. Joseph P.L., MI

Reminiscent of old Nero Wolfe or Agatha Christie morsels, Runcie's (Colour of Heaven) satisfying short story whodunits are set in a British village in the early 1950s and star the titular Chambers, a WWII vet and local canon (like a vicar, only more ass-kicking). Chambers, like me, is a tall, dark, handsome bike rider. We're both keen observers, good listeners. Our housekeepers leave eerily similar notes ("More Vim please. And Harpic. Fish tomorrow. Not Friday"). We enjoy similar snacks-Sid his "consoling Chelsea bun" from Fitzbillies and me my big honkin' apple fritters from the day-old bakery. We're both a lot like Chuck Norris*, only where me and Chuck kick down doors and export pain, Sid's scruples compel him to quietly right injustices using his intellect and occasional help from his pal the local backgammon-playing police inspector. Sid is likable, but he won't be confused with any street lit protagonist-and that's the appeal. Those seeking mild, tame mystery puzzles will enjoy this-and the many instances of Chambers's naiveté, as when he ponders, in the first mystery, "It was his first case of adultery, never mind murder." *But that's where the similarities end, sister, cause I'm a hard-charging, gun-for-hire cataloger with a heart of lead and a gaze that can stop an errant 810 series added entry dead in its subfield 6 linkage track. - Douglas Lord, "Books for Dudes," LJ Reviews 5/3/12 (c) Copyright 2011. Library Journals LLC, a wholly owned subsidiary of Media Source, Inc. No redistribution permitted.

Runcie (Canvey Island) launches a promising new clerical series with this collection of interlocking short whodunits featuring a latter-day Father Brown, Canon Sidney Chambers. In the first selection, set in 1953, the Anglican minister presides over the funeral of a suicide, Stephen Staunton. When Pamela Morton, whose husband was Staunton's law partner and who believes Staunton was murdered, seeks Chambers out, Chambers agrees to ask questions informally, despite the skepticism of a friend on the force. His success in resolving Mrs. Morton's concerns proves to be just the starting point as an amateur sleuth. In subsequent chapters, he investigates a jewel theft, suspicions that a doctor is performing euthanasia, and a strangulation in a jazz club. The last case, "Honourable Men," is the strongest after the opening mystery, with a sophisticated plot centering on the murder of the actor playing Julius Caesar during a staging of the assassination scene from Shakespeare's play. That Runcie is the son of former archbishop of Canterbury Robert Runcie lends biographical interest. Agent: David Godwin, David Godwin Associates. (May)