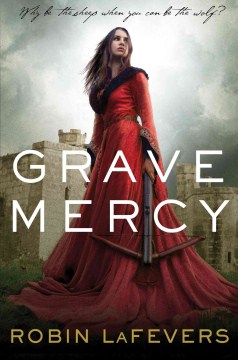 *Starred Review* In the late fifteenth century, Mortain, the god of death, has sired Ismae to be his handmaiden. She will carry out his wishes by working through the Convent, where she has found refuge from a brutal father and husband. After learning the Convent's wily warfare and womanly arts, and being apprenticed to Sister Serafina (poisons mistress and Convent healer), 17-year-old Ismae is sent to the high court of Brittany, ostensibly as the cousin (aka mistress) of the Breton noble Duval—but, in truth, she is there as a spy. Her tacit assignment is to protect the young duchess by assassinating Duval if he proves to be a traitor, a charge made more difficult because of the couple's attraction to each other. LaFevers has written a dark, sophisticated novel true to the fairy-tale conventions of castles, high courts, and good versus evil, and spiced with poison potions; violent (and sometimes merciful) assassinations; subtle seductions; and gentle, perfect love. With characters that will inspire the imagination, a plot that nods to history while defying accuracy, and a love story that promises more in the second book, this is sure to attract feminist readers and romantics alike. HIGH-DEMAND BACKSTORY: With a $100,000 marketing campaign, including national print, online, and social-media outreach; a video trailer; and a vintage T-shirt promotion, the publisher is pushing LaFevers' novel in a big way. Copyright 2012 Booklist Reviews.

Running from an arranged marriage, seventeen-year-old Ismae lands up at St. Mortain's convent, discovers she has special gifts (and that her true father is Mortain, the god of Death), and trains to become an assassin--the true vocation of a daughter of Death. This light romantic fantasy, set in an alternate, fictional, quasi-late medieval Brittany, might well appeal to fans of Libba Bray's Rebel Angels books.

The results of her mother's failed abortion caused Ismae to be born with scars that show her true father, one of Brittany's "old gods": Mortain, the god of Death himself. When Ismae is spirited away from a marriage that promises only abuse, she lands up at St. Mortain's convent, where she trains to become an assassin -- the true vocation of a daughter of Death. When the abbess assigns her a job at the court of the Duchess of Brittany -- protecting the beleaguered young duchess, but also keeping an eye on dashing, possibly treacherous Gabriel Duval -- Ismae is thrown into a life far beyond her peasant upbringing. Needless to say, she negotiates secret passages, glam gowns, court intrigue, and cross-class love with success. This light romantic fantasy, set in an alternate, fictional, quasi-late medieval Brittany, has all the elements of fanciful historical romance with the added frisson of a heroine who's an assassin. Written in the present tense and with a turn of phrase that segues unabashedly from semi-archaic British ("bestir") to contemporary American ("fallback position"), this might well appeal to fans of Libba Bray's Rebel Angels books. deirdre f. baker Copyright 2012 Horn Book Magazine Reviews.

This novel has the best two-word pitch of any this season: Assassin nuns. Novitiates in the convent of St. Mortain learn more than piety. They master the disciplines of swordplay and seduction, all in the service of their god, Death. Ismae seeks sanctuary in the convent after a disaster of an arranged marriage, her scarred back marking her as a daughter of Death. But the convent does not exist for the purpose of worship; the daughters of St. Mortain are called into the world to bring their special form of communion to the political sphere. Ismae is sent to the court of the young duchess of Brittany to expose and eliminate the traitors in her midst. Posing as the mistress of the duchess's attractive confidante, Gavriel Duval, she is forced to combat the greatest traitor of all: her willful and untrained heart. This first volume in the "His Fair Assassin" series pairs a wildly appealing heroine, a mysterious lord, and a skillfully built world that readers will want to reenter, book after book. Its cover image of a determined young woman wielding a crossbow sets the stage for the book within: Ismae is tough and willing to change the rules of the game to follow her own path. It is for us to delight in the journey. — "35 Going on 13" LJ Reviews 6/21/12 (c) Copyright 2011. Library Journals LLC, a wholly owned subsidiary of Media Source, Inc. No redistribution permitted.

Middle-grade author LaFevers (the Theodosia books) makes an outstanding foray into historical romance with an enthralling recreation of 15th-century Brittany. At its center is 17-year-old Ismae, a badly scarred peasant girl who, fleeing her thuggish husband, is taken in by the convent of St. Mortain, whose patron saint is the ancient, pre-Christian god of death. Believed to be Death's literal daughter, blessed (or cursed) with powerful gifts, Ismae is trained as an assassin, highly competent with all weapons and poisons. After two successful missions, she is dispatched to the court of Anne of Brittany to keep track of Duval, the duchess's handsome and tempestuous illegitimate older brother. Reluctantly, she falls in love with him, knowing full well that she may someday be called upon to end his life. Rich in historical detail, well-realized characters, political machinations, and enticingly prickly scenes between Ismae and Duval, LaFevers's complex tale incorporates magic both sparingly and subtly. This powerful first volume of the His Fair Assassin series should attract many readers. Ages 14–up. Agent: Erin Murphy, Erin Murphy Literary Agency. (Apr.)

A great and terrible beautyBray, Libba

Daughter of smoke and boneTaylor, Laini