The bookseller : the first Hugo Marston novel / by Mark Pryor. 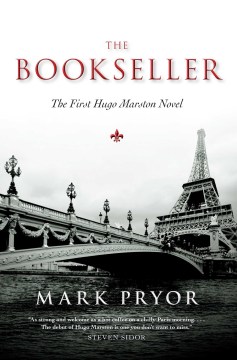 Aging bookseller (bouquiniste) Max Koche, who has a stall on the bank of the Seine, has become a friend of Hugo Marston, head of security at the American embassy in Paris. So when Max is kidnapped at gunpoint as Hugo is buying two first editions from him, and the investigating detective doesn't take the abduction seriously, Hugo takes matters into his own hands. His old FBI colleague Tom Green, now retired from the CIA, has both time and resources to lend a hand, along with crime reporter Claudia Roux, who turns out to be more than just an attractive bedmate. As the bodies of bouquinistes are pulled from the Seine, Hugo uncovers still-painful secrets from World War II and becomes involved in a drug war. In his first mystery in a projected series, Pryor shows some of the signs of a debut novelist, notably with somewhat stiff characterizations and prose. But this will have some appeal for bibliophiles, and it has a nice sense of place. For readers who will always have Paris, the novel's flaws will be ignored. Copyright 2012 Booklist Reviews.

Hugo Marston, a former FBI agent, works security at the U.S. embassy in Paris. He is enough of a maverick (he is from Texas, after all) to investigate when his friend Max, a bouquiniste (one of those famed booksellers along the Seine), is kidnapped. Dumbfounded by the police's lackluster response, Hugo calls in Tom Green, his buddy from Quantico, now a retired CIA operative who's bored out of his mind. Then there's the lovely Claudia, a reporter who smells a good story and who just happens to be the daughter of a count. As the bodies of more missing booksellers are found floating in the Seine, Hugo finally gets a police detective on his side. The chase is on! VERDICT Pryor's steady and engrossing debut combines Sherlockian puzzle solving with Eric Ambler-like spy intrigue. With a cast of characters you want to know better and a storyline cloaked in World War II betrayals (think Nazi collaborators), the author winningly blends contemporary crime with historical topics. Pair with Cara Black's Aimée Leduc series for both locale and tone. [See also Claude Izner's Parisian bookseller-themed historical, In the Shadows of Paris, in Series Lineup.] (c) Copyright 2011. Library Journals LLC, a wholly owned subsidiary of Media Source, Inc. No redistribution permitted.

Books, secrecy, and intrigue are good, but setting this book in Paris propels a male version of a Harlequin romance, a James Bond-ian fantasy with all the secret embellishments that we dudes harbor deep in our absurd little psyches. Exhibit 1: Skills: Hugo Marston is former FBI and now chief of U.S. consular security in Paris. Exhibit 2: Looks: He's impossibly handsome, comparing favorably to Cary Grant. Exhibit 3: Sympathy/pity: a widower just shafted by his second wife, Hugo has nothing to lose and is ready to take some risks. Exhibit 4: Ka-ching: he pays a thousand Euros for a couple of books from a street vendor. Case closed. Also—there's book porn: "It was bound in full maroon Morocco leather, banded, and lettered in gilt with marbled endpapers, and …the original cloth backstrip"[1]. When Hugo witnesses the very weird, probable kidnapping of his bookseller friend, and when he can't get the French authorities interested, he's driven[2] to crack the case and win the day. Though realistic, the dialog can feel forced. The level of detail paints a vivid picture. [LJ 9/12/12.—Ed.] (c) Copyright 2011. Library Journals LLC, a wholly owned subsidiary of Media Source, Inc. No redistribution permitted.

Austin, Tex., ADA Pryor introduces, in his amiable first mystery, a former FBI profiler, and transplanted Texan, Hugo Marston. Wandering the City of Light on vacation from his official position as the U.S. embassy's security chief, Hugo sees a gun-toting thug kidnap elderly book dealer Max Koche straight from Max's Seine-side bookstall. When the police are slow to act, Hugo undertakes his own investigation, discovering a pattern of similar crimes against Max's community of booksellers, the bouquinistes, possibly linked to feuding drug gangs. Hugo's developing romance with journalist Claudia de Roussillon, his first since an unpleasant divorce, provides relief from the stress of the case, until a connection appears between Claudia's aristocratic father and Max's surprising past as a Nazi hunter. Pryor minimizes any of the true crime grittiness readers of his true crime blog, D.A.Confidential.com, might have expected, instead sketching a somewhat touristy but nonetheless convincing France and a refreshingly unconflicted, likable hero. Agent: Rees Literary Agency. (Oct.)

Murder in the Palais RoyalBlack, Cara, 1951-

A twist of hateBarkowski, V. R.