A killing in the hills / Julia Keller. 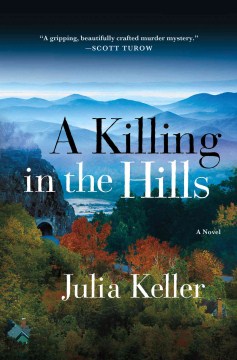 *Starred Review* The shooting of three old men having coffee in a diner on a Saturday morning rattles the people of Acker's Gap, West Virginia, "a shabby afterthought of a town" in the Appalachians. Next on the hired shooter's list is county prosecutor Belfa (Bell) Elkins, whose return to poverty-plagued Acker's Gap after a dreadful childhood led to her divorce. Even with a killer on the loose and an important case to handle—a mentally challenged adult charged with unintentionally killing his six-year-old playmate—Bell remains dogged in her war against the drugs that she sees as the single biggest threat to the future of the state. As Bell's rebellious 17-year-old daughter, Carla, who witnessed the shootings, tries to identify the man responsible, she puts herself and her mother in deadly peril. Chicago Tribune Pulitzer-winning journalist Keller has fashioned a debut mystery with an impeccably paced plot, supple prose, and indelibly drawn characters, foremost among them Bell and her family; Bell's best friend and childhood savior, Sheriff Nick Fogelsong; and her friends Ruthie and Tom Cox. A page-turner with substance and depth, this is as suspenseful and entertaining as it is accomplished. Copyright 2012 Booklist Reviews.

The shocking opening of Keller's debut—the point-blank fatal shooting of three old men at a fast-food joint in rural West Virginia—will jerk unsuspecting readers out of their complacency. Carla, the adolescent daughter of the county's lead prosecutor, Belfa "Bell" Elkins, witnesses the shooting, but with the logic of a teenager, she doesn't tell anyone what she knows. Bell, an intensely driven loner, senses that this killing ties in with the wave of drug crimes threatening to overwhelm her county. She must also wrestle with another troubling case involving a developmentally disabled young man accused of murdering his friend. While Bell tears all over the county questioning people, Carla's lies of omission come to haunt her. VERDICT Keller's vividly described characters and shifting points of view make this debut novel especially realistic. Occasionally, a plot thread peters out (e.g., where did all the reporters go?), but the story is so engrossing that pages just fly by. Keller, a Pulitzer Prize-winning journalist, neatly straddles the line between moralizing and storytelling with this superbly detailed and suspense-drenched mystery. Share with Linda Fairstein, Meg Gardiner, and Lisa Gardner fans.

At the start of Pulitzer Prize–winning journalist Keller's outstanding first novel, 17-year-old Carla Elkins is waiting for her divorced mother, Bell Elkins, Raythune County's prosecuting attorney, at the Salty Dawg, a chain restaurant in Acker's Gap, W.Va., when three old men are shot dead at a nearby table. Carla catches only a glimpse of the killer at the Salty Dawg's entrance before he flees. Bell, who's been crusading with the local sheriff against the growing illegal traffic in prescription drugs and the violence it spawns, investigates the triple slaying, as does rebellious Carla. Meanwhile, the drug boss orders the assassin to kill the meddling prosecutor. Keller does a superb job showing both the natural beauty of Appalachia and the hopeless anger of the people trapped there in poverty. Some characters turn out to be better than they appear, some much worse, but the ensemble cast is unforgettable. So is this novel. Agent: Lisa Gallagher, Sanford J. Greenburger Associates. (Aug.)

The heat of the moonParshall, Sandra

Signs in the bloodLane, Vicki