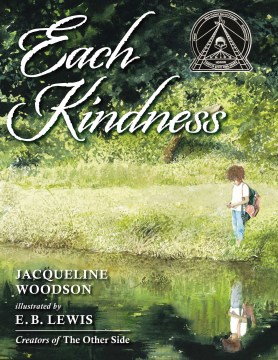 *Starred Review* Starting with the title, this quiet, intense picture book is about the small actions that can haunt. As in collaborations such as Coming on Home Soon (2004), Woodson's spare, eloquent free verse and Lewis' beautiful, spacious watercolor paintings tell a story for young kids that will touch all ages. In a first-person voice, Chloe speaks about how a new girl in class, Maya, gets the empty seat next to her and tries to be friends. But Chloe and her clique will have none of the poor white kid in her old ragged clothes, and their meanness intensifies after Maya asks to play with them. Then Maya's family moves away, and she is "forever gone," leaving Chloe without the chance to put things right. Chloe's teacher spells out lessons of kindness, but the story is most powerful in the scenes of malicious bullying in the multiracial classroom and in the school yard. It is rare to tell a story of cruelty from the bully's viewpoint, and both the words and pictures powerfully evoke Chloe's shame and sorrow over the kindness she has not shown, as she looks at the empty seat next to her in the classroom, and then, alone and troubled, throws a stone in the water and watches the ripples move out and away. HIGH-DEMAND BACKSTORY: The combined talents and star power of Woodson and Lewis will undoubtably create plenty of pre-pub. buzz. Copyright 2012 Booklist Reviews.

At recess, Chloe pointedly gathers her best friends to share secrets while ignoring new-girl Maya's advances of friendship. Maya plays alone, seemingly unbowed by the ostracism, until one day, suddenly, she's gone. A silent, belatedly thoughtful Chloe regrets "each kindness I had never shown." Woodson's affecting story focuses on the withholding of friendship rather than outright bullying; Lewis reflects the pensive mood in sober watercolors.

Narrator Chloe turns her back when new student Maya, clothed in what appear to be thrift-store oddments, is seated next to her in class. At recess, Chloe pointedly gathers her best friends to share schoolyard secrets, ignoring Maya's advances of friendship. Maya plays alone, seemingly unbowed by the continuing ostracism, until one day, suddenly, she's gone. Only then does teacher Ms. Albert prompt the class to share with one another stories about "what kind things we had done" -- acts that might have "rippled out" like the pebbles they drop into a bowl of water as they describe their good deeds; meanwhile, a silent, belatedly thoughtful Chloe regrets "each kindness I had never shown." Woodson's affecting story, with its open ending, focuses on the withholding of friendship rather than outright bullying, and Lewis reflects the pensive mood in sober watercolors, suggesting Maya's troubled courage and Chloe's repentance in subtly detailed portraits. Like Ms. Albert's little stones, the book is a good conversation starter. joanna rudge long

When a new and clearly impoverished girl named Maya shows up at school ("Her coat was open and the clothes beneath it looked old and ragged"), Chloe and her friends brush off any attempt to befriend her. Even when Maya valiantly—and heartbreakingly—tries to fit in and entice the girls to play with her, she is rejected. Then one day, Maya is gone, and Chloe realizes that her "chance of a kindness" is "more and more forever gone." Combining realism with shimmering impressionistic washes of color, Lewis turns readers into witnesses as kindness hangs in the balance in the cafeteria, the classroom, and on the sun-bleached playground asphalt; readers see how the most mundane settings can become tense testing grounds for character. Woodson, who collaborated with Lewis on The Other Side and Coming On Home Soon, again brings an unsparing lyricism to a difficult topic. The question she answers with this story is one that can haunt at any age: what if you're cruel to someone and never get the chance to make it right? Ages 5–8. Agent: Charlotte Sheedy Literary Agency. Illustrator's agent: Dwyer & O'Grady. (Oct.)