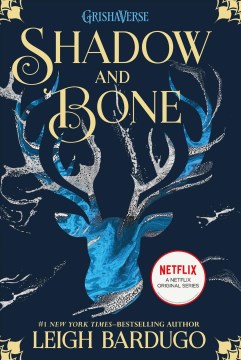 Debut author Bardugo has conjured up a treat with her first book in the Grisha Trilogy. In the opening passages, a tight bond is formed by two small orphans: handsome, competent Mal and tiny Alina, who never seems to do anything right. Jumping forward in time, the story follows the two friends after they have joined the King's First Army—Mal as a soldier-tracker and Alina as a cartographer. Their land of Ravka is surrounded by enemies and divided by the Shadow Fold, a mysterious, magical darkness that seethes with flesh-eating monsters. After Alina discovers that she possesses a magical power, she is taken to the royal court to be trained as a member of the Grisha, magicians who practice the Small Science. Resembling Czarist Russia, the court swirls with deceit and extravagance, and although Alina falls under the spell of the handsome Darkling, she misses Mal grievously. Bardugo weaves a captivating spell with lushly descriptive writing, engaging characters, and an exotic, vivid world. Readers will wait impatiently for the next installment. HIGH-DEMAND BACKSTORY: A six-figure marketing campaign is already ensuring that this series debut receives blockbuster attention. Copyright 2012 Booklist Reviews.

When Alina and fellow orphan (and best friend) Mal are attacked by monsters, Alina discovers a hidden gift: she is able to manipulate light and thus save Mal. The king's mage sweeps her off to develop her abilities--but what about her bond with Mal? A rich fantasy landscape, an inspired magical structure, and a gratifying emotional hook keep the pages whirring by.

Crossing the Shadow Fold with their army unit, Alina and her handsome fellow orphan (and best friend) Mal are attacked by the Volcra, hideous creatures that live in the dark of that magic-blasted land. The threat of Mal's imminent death brings forth a rare and hidden magical gift in Alina: she is a Sun Summoner, able to manipulate light and thus save Mal. Her talent draws the attention of the Darkling, the king's most powerful mage, who sweeps her off to his palace to develop her abilities further. Wrapped in luxury and promised a brilliant future, Alina is drawn in by the Darkling's seductive magnetism, but what about her bond with Mal? Out on the frontier scouting with his army unit, he won't even answer her letters -- is it time for her to move on? A rich fantasy landscape, an inspired magical structure, and a gratifying emotional hook keep the pages whirring by until a final twist upends assumptions and lands us smack in the middle of a harrowing climax. And Bardugo's readers are in luck: it appears the author is planning a sequel. anita l. burkam

In a strong debut, Bardugo draws inspiration from Russian and Slavic myth and culture to kick off her Grisha trilogy. In the nation of Ravka, Alina Starkov is a junior cartographer's assistant in the army, while her best friend Mal is an expert tracker. When a perilous mission into the magically created Shadow Fold goes wrong, Mal is gravely wounded and Alina manifests the rare ability to summon light. Immediately recruited into the order of the magic-using Grisha, Alina is taken under the wing of its intimidating and powerful leader, the Darkling, and heralded as the potential destroyer of the Shadow Fold. As she navigates Grisha politics and uncovers well-hidden secrets, she realizes that the fate of the nation rests on her shoulders and she may be in grave danger. Filled with lush descriptions, intriguing magic, and plenty of twists, this memorable adventure offers action and intrigue mixed with an undercurrent of romance and danger. Alina's angst and passivity are a bit of a letdown, but Bardugo's storytelling and world-building more than compensate. Ages 12–up. Agent: Joanna Stampfel-Volpe, Nancy Coffey Literary Agency. (June)

Through the white woodLeake, Jessica

Silver phoenix: beyond the Kingdom of XiaPon, Cindy, 1973-