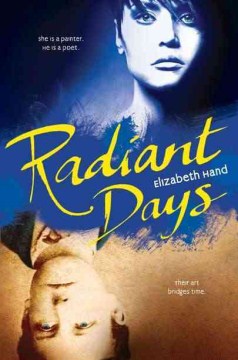 Merle, a graffiti artist and art-school dropout, tags the streets of 1970s Washington, D.C., with her trademark, an exploding sun with the words Radiant Days scrawled on walls and buildings. She has nothing left. No family, no friends—even her art is stolen from the condemned flat where she was squatting. In a separate story line set 100 years earlier, Arthur, who traverses 1870s France, spends his time writing poetry, getting arrested, and reveling in the freedom of his rootless existence. This fantasy-tinged novel introduces readers to Arthur Rimbaud, the patron saint of young artists, and his expansive sphere of influence in a way that will capture readers' interest. Hand's strong suit is conjuring up vivid images, but while Merle's narrative is rendered in beautiful, frustrated, and disbelieving first person, the omniscient third granted to Rimbaud's passages falls flat in comparison. Still, his speculative, detailed, and evocative flight of fancy is a stirring tribute to a man and his art. Copyright 2012 Booklist Reviews.

After breaking up with her older girlfriend/patron, painter and graffiti artist Merle happens upon a mystical, aging rock legend who gives her the key (literally) to a doorway in time. An evening sharing visionary dreams with sixteen-year-old Arthur Rimbaud inspires both burgeoning artists. This impassioned ode to free-spirited artists introduces readers to the nineteenth-century French poet who influenced generations of counterculture artists.

Hand (Illyria) returns with a surreal tale of art's ability to transcend time. In 1978, Merle Tappitt, a talented painter and graffiti artist, is kicked out of art school (where she had been having an affair with a teacher). Merle takes to the streets of Washington, D.C., and runs into a legendary, now homeless guitarist, Ted Kampfert, who points her toward a lockhouse by a canal where she can spend the night. Meanwhile, in 1870, 16-year-old poet Arthur Rimbaud sets out for Paris, also bedding down in a lockhouse. The next morning, Merle and Arthur awake together in 1978. Merle and Arthur, both gay, form a mystical bond, time-slipping between their worlds, each influencing the other to produce great art. Hand's descriptions of art and poetry as they are being made are breathtaking—"In front of me was a whorl of black and red, emerald vines and orange flame, a shifting wheel of shadowy forms like those cave paintings drawn in charcoal"—and her troubled, beautifully drawn characters make the heart ache. Ages 14–up. Agent: Martha Millard, Martha Millard Literary Agency. (Apr.)

Stone mirrors: the sculpture and silence of Edmonia LewisAtkins, Jeannine, 1953-

In Paris with youBeauvais, Clementine