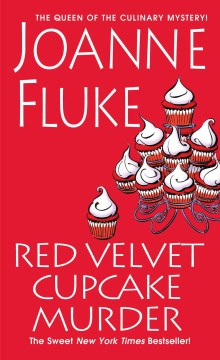 Hannah's eighteenth adventure in Lake Eden, Minnesota involves a suspicious accident and then a murder. Fluke is now involving well known characters as victims, when the police department secretary falls off the roof of a condo building during a party. Barbara, the victim, insists her brother pushed her, but no one is aware of any siblings. Hannah finds the fiancé of one of her former boyfriends at the bottom of a lake and becomes a suspect. She also has her hands full sorting some leftover questions from the previous Cinnamon Roll Murder. While the always right Hannah along with the continuous presence of her two love interests defy belief and try patience at times, Fluke continues to appeal with delicious recipes and warm small town personalities in between the three cases solved in this title. Series and food fans will enjoy this one as well as cupcake themed titles from Jenn McKinlay. Copyright 2012 Booklist Reviews.

Hannah Swensen's eighteenth adventure in Lake Eden, Minnesota, begins with a suspicious accident at the opening of a refurbished hotel—Hannah's famous red-velvet cupcakes are being served in the hotel's new Red Velvet Lounge. After police-department secretary Barbara, a recurring series character, falls off the roof during the party, Barbara insists her brother pushed her, but no one is aware that she had any siblings. Then Hannah finds the fiancée of one of her former boyfriends at the bottom of a lake and becomes a suspect. Although Hannah's infallibility defies belief and tries patience, Fluke continues to appeal with delicious recipes and warm, small-town personalities. Series readers will enjoy following the continuing story, and, of course, fans of cupcake-themed mysteries by Jenn McKinlay will savor those red-velvet treats. Copyright 2012 Booklist Reviews.

Hannah Swensen's cupcakes come under suspicion when an old rival dies from poisoning. Culinary cozies don't get any tastier than this winning series, now serving up case number 18 (after Cinnamon Roll Murder).

Despite the 26 sweet and savory recipes scattered throughout, crime buffs may find little nourishment in bestseller Fluke's 16th Hannah Swenson novel (after 2012's Cinnamon Roll Murder). As the owner of the Cookie Jar coffee shop and bakery in Lake Eden, Minn., Hannah helps cater the Albion Hotel's grand reopening, where the main event proves to be the return of the notorious town floozy, "Doctor Bev," on the arm of the hotel's owner, wealthy playboy Roger Dalworth. More than gossip is in the air, though, after the Lake Eden sheriff's secretary, Barbara Donnelly, falls from the hotel penthouse, sustaining serious brain damage. A subsequent fatal automobile accident suggests to Hannah that murder is once again stalking the small town. Fluke fans should appreciate the reappearance of series regulars like Hannah's two boyfriends, Mike Kingston and Norman Rhodes (who turns out to be an old flame of Bev's), but the tepid humor and meandering storyline are unlikely to win newcomers. Author tour. (Mar.)

A slice of murderCavender, Chris