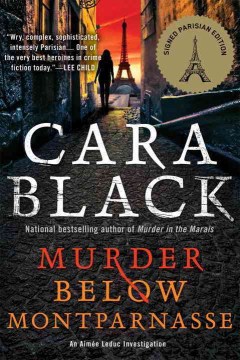 Beleaguered Parisian investigator Aimée Leduc has a couple of new problems: her best friend and partner, Rene Friant, has decamped to Silicon Valley, and, equally disturbing, Aimée is having trouble fitting into her vintage Dior. All that pales in comparison, however, when she receives a phone call from a Russian manwho wants her to find a lost painting and who claims to have known Aimée's long-vanished mother. Any mention of Maman sends Aimée into high gear, and that turns out to be a very good thing as the plot strands start raining down on her like golf-ball-sized hailstones: the missing painting is an unknown Modigliani, a portrait of Lenin done when he lived in Paris, and its allure prompts multiple murders in the quartier below Montparnasse, where latter-day revolutionaries continue to plot and counterplot; Rene has his own crisis when it turns out his new bosses are crooks; and let's not forget the Serb who is determined to kill Aimée and her friend Saj. Longtime fans of the series will turn pages frantically, hoping to finally meet Aimée's mother, and, as always, Black directs traffic with panache. Copyright 2012 Booklist Reviews.

It's the 13th title in Black's brisk, engaging "Aimée Leduc Investigation" series, and where is her friend and business partner, René Friant? He's gone to Zeelakon Vallaay (that's Silicon Valley, English speakers) for a six-figure job and some troubles of his own. But that doesn't keep Aimée from plunging into another juicy, culturally intriguing case. When she's picked up after an assignment by Leduc's part-time hacker, Saj, he passes along a request from potential client Yuri Volodya, who claims to have known Aimée's mother. That's enough to make her persuade Saj to steer toward Volodya's door, but as they arrive Saj hits and evidently kills a man emerging from between two cars. The man is Serb mafia, bad news for Saj. Meanwhile, Volodya reports that he's been robbed of a precious painting, though he's pretty cat-and-mouse about whether Aimée should hunt it down. Aimée learns something about the painting—a portrait that could change our sense of a key historical figure—and about her mother, a shadowy but significant figure in the series we'll need to rethink. VERDICT Another great Aimée Leduc read; fans will be intrigued by the new developments.—Barbara Hoffert, Library Journal

A tantalizing clue to the whereabouts of Paris PI Aimée Leduc's mysterious mother puts a personal spin on Black's intricate 13th mystery set in contemporary Paris (after 2012's Murder at the Lantern Rouge). Yuri Volodya, an elderly Russian who wants to hire Aimée to protect a valuable painting, possibly a Modigliani, tells Aimée he knew her mother, Sydney, whom she hasn't seen since Sydney abandoned her at age eight. When the painting is stolen and Yuri is later tortured and killed, the police investigate. Meanwhile, a bizarre accident sidelines Aimée's part-time hacker helper, "cash-poor aristocrat" Saj de Rosnay. Leduc must also cope amid threats of violence without trusted computer expert René Friant, lured to America by a Silicon Valley firm in a lengthy, well-developed subplot. Allusions to Modigliani, Picasso, Cocteau, Man Ray, and Duchamp help evoke 1920s Paris, though the complicated relationships among the principals will be more meaningful to series fans than to newcomers. Agent: Linda Allen, Linda Allen Literary Agency. (Mar.)