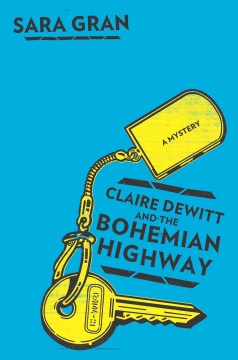 Drug-taking, tarot-reading San Francisco detective Claire DeWitt (Claire DeWitt and the City of the Dead, 2011) is back. The death of guitarist Paul Casablancas, an ex-boyfriend, causes Claire to revisit her murky past and, eventually, to connect Paul's murder to some of her earlier cases, particularly the disappearance of a teenage friend in New York's East Village in the 1980s. Paul's death hits Claire hard, and helping his widow find closure tests her commitment to detective work. Claire continues to rely on her herbalist, her grad-student assistant Claude, and the lama at the Dorje Temple to prop her up (sometimes literally.) Claire is terrific at getting to the bottom of other people's problems but not so good at dealing with her own. But that's the peculiar charm of this punky sleuth and her offbeat entourage. Copyright 2012 Booklist Reviews.

Claire's old love, Paul Casablancas, is murdered in an apparent robbery gone bad, opening a floodgate of emotions for her. She finds a clue ("trust only the clues," says her detective mentor, Jacques Silette) that helps her trace Paul's final steps that ultimately led to his death. Two cases separated by 25 years—the old one in Claire's native Brooklyn and the current in San Francisco—define Gran's second series entry. Through Claire's flashbacks and dreams, readers are transported into her intuitive detecting methods—an exhausting process unique to this fine detective. Claire's increasing reliance on cocaine as the case escalates worries both her friends and the readers, but she never loses track of her cases, leading to a stunning conclusion. VERDICT Gran's (Claire DeWitt and the City of the Dead) detective searches for truth, not necessarily justice, and philosophical tidbits scattered throughout give the storyline an otherworldly tone. Remarkably, Gran keeps her tortured detective focused throughout, ensuring a satisfying read. Highly recommended.

Gran succumbs to sophomore slump in her second Claire DeWitt mystery (after 2011's Claire DeWitt and the City of the Dead). An atypical PI who would be at home in a Hunter Thompson story, the sarcastic Claire relies on her dreams, mind-enhancing drugs, a computer-hacker assistant, and her professional bible, Détection by French detective Jacques Silette, to solve crimes. Claire has moved to San Francisco, where she's caught up in the murder of her old boyfriend, Paul Casablancas, in what appears to be a botched robbery. She follows clues about Paul's murder and comforts his rock-musician widow, Lydia Nunez, while investigating miniature horse thefts and while looking into the disappearance of an old friend who vanished during the 1980s in Manhattan's East Village. Rehashed plot points, wearisome characters (Claire's manic personality can grate), and a rushed denouement make this a lesser effort from a talented author. Agent: Barney Karpfinger, the Karpfinger Agency. (June)