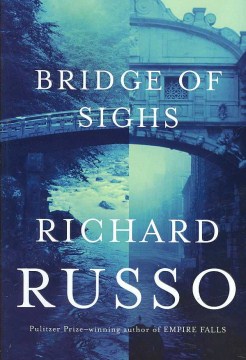 *Starred Review* Here is the novel Russo was born to write. Coursing with humor and humanity, the sixth novel by the bard of Main Street U.S.A. gives full expression to the themes that have always been at the heart of his work: the all-important bond between fathers and sons, the economic desperation of small-town businesses, and the lifelong feuds and friendships that are a hallmark of small-town life. Following a trio of best friends who grew up in upstate Thomaston, New York, over 50 years, the novel captures some of the essential mysteries of life, including the unanticipated moments of childhood that will forever define one's adulthood. Louis Charles ("Lucy") Lynch has spent his entire life in Thomaston, married for 40 years to his wife, Sarah, and finally living in the rich section of town, thanks to the success of his father's convenience stores. Long planning a trip to Venice, he tries in vain to communicate with the couple's best friend, Bobby Marconi, now a world-famous painter living in Venice. Meanwhile, the irascible ex-pat, now approaching 60 and suffering from night terrors, is still chasing women, engaging in fistfights, and struggling to complete his latest painting. Russo slowly and lovingly pieces together rich, multilayered portraits not only of the principals but also of their families, and, by extension, their quintessentially American town. It is a seamless interweaving of childhood memories (sometimes told from three points of view), tragic incidents (the town river, once the lifeblood of local industry, has become a toxic stew that is poisoning residents), and unforgettable dialogue that is so natural, funny, and touching that it may, perhaps, be the best of Russo's many gifts. Copyright 2007 Booklist Reviews.

Contented at 60, Louis Charles ("Lucy") Lynch is set to travel to Italy, where he will try to understand his past as he reconnects with a childhood friend who's become a painter. With a 12-city tour; reading group guide. Copyright 2007 Reed Business Information.

With the same humor and pathos that turned Empire Falls and Straight Man into best sellers, Russo's latest tale unravels the tangled skein of love, regret, hope, and longing that wraps itself around friends and family in a small upstate New York town. Russo's multigenerational tale follows the fortunes of two families, especially the careers of the respective sons. Although Louis Charles Lynch and Bobby Marconi come from very different backgrounds, they bond over Bobby's defense of Lou in elementary school. As they grow older, they drift apart, with Bobby changing his name to Robert Noonan and moving to Venice, where he becomes a world-famous artist. Louis stays in Thomaston, marries high school sweetheart Sarah (also an artist), and helps out his family in their grocery store. Although Louis reluctantly agrees to visit Venice with Sarah, several events converge to alter their plans (including Sarah and Bobby's possible love for each other), and their lives change in ways that neither could have anticipated. While Russo's tale gets off to a slow start and the attempt to tell the parallel stories of Louis and Bobby is not always successful, Russo's novel is nevertheless a winning story of the strange ways that parents and children, lovers and friends connect and thrive. [See Prepub Alert, LJ 6/1/07.]—Henry L. Carrigan Jr., Evanston, IL

Richard Russo's portraits of smalltown life may be read not only as fine novels but as invaluable guides to the economic decline of the American Northeast. Russo was reared in Gloversville, N.Y. (which got its name from the gloves no longer manufactured there), and a lot of mid–20th-century Gloversville can be found in his earlier fiction (Mohawk ; The Risk Pool ). It reappears in Bridge of Sighs , Russo's splendid chronicle of life in the hollowed-out town of Thomaston, N.Y., where a tannery's runoff is slowly spreading carcinogenic ruin.

At the novel's center is Lou C. Lynch (his middle initial wins him the unfortunate, lasting nickname "Lucy"), but the narrative, which covers more than a half-century, also unfolds through the eyes of Lou's somewhat distant and tormented friend, Bobby Marconi, as well as Sarah Berg, a gifted artist who Lou marries and who loves Bobby, too. The lives of the Lynches, the Bergs and the Marconis intersect in various ways, few of them happy; each family has its share of woe. Lou's father, a genial milkman, is bound for obsolescence and leads his wife into a life of shopkeeping; Bobby's family is being damaged by an abusive father. Sarah moves between two parents: a schoolteacher father with grandiose literary dreams and a scandal in his past and a mother who lives in Long Island and leads a life that is far from exemplary.

Russo weaves all of this together with great sureness, expertly planting clues—and explosives, too—knowing just when and how they will be discovered or detonate at the proper time. Incidents from youth—a savage beating, a misunderstood homosexual advance, a loveless seduction—have repercussions that last far into adulthood. Thomaston itself becomes a sort of extended family, whose unhappy members include the owners of the tannery who eventually face ruin.

Bridge of Sighs is a melancholy book; the title refers to a painting that Bobby is making (he becomes a celebrated artist) and the Venetian landmark, but also to the sadness that pervades even the most contented lives. Lou, writing about himself and his dying, blue-collar town, thinks that "the loss of a place isn't really so different from the loss of a person. Both disappear without permission, leaving the self diminished, in need of testimony and evidence."

If there are false notes, they come with Russo's portrayal of African-Americans, who too often speak like stock characters: ("Doan be given me that hairy eyeball like you doan believe, 'cause I know better," says one). But Russo has a deep and real understanding of stifled ambitions and the secrets people keep, sometimes forever. Bridge of Sighs , on every page, is largehearted, vividly populated and filled with life from America's recent, still vanishing past.

Jeffrey Frank's books include The Columnist and Bad Publicity. His novel, Trudy Hopedale, was published in July by Simon & Schuster.

My name is Lucy BartonStrout, Elizabeth