A street cat named Bob : and how he saved my life / James Bowen. 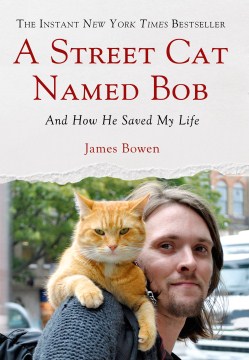 *Starred Review* Books abound on the subject of how a dog or a cat can rehabilitate a person's life, but this account of such an event is stellar. Only a heart of stone will not be moved—even to tears—in bearing witness to the love of a London street musician for the gorgeous ginger tomcat he found one day in his apartment building hallway. The cat, soon called Bob, was injured, so Bowen took him in but planned to nurse him only for a short while. After all, so Bowen's reasoning went, he had very little surplus money to feed another mouth, and Bob, a "man" of the streets, would undoubtedly soon tire of domesticity and one day run away to hit the streets again. But that never happened. Bowen was a recovering addict and was himself recently just off the streets, and he soon established an intensely simpatico relationship with Bob. He fixed Bob up—and fixed Bob—and took him with him every day as he played guitar at the usual corner spots he'd claimed for himself. Bob became an instant attraction, and the result was increased income for Bowen as more money was tossed into his guitar case. This is a beautiful, never maudlin story of second chances for both man and beast and a poignant testimony to how much caring for someone—or some feline—can give you renewed direction when you're down and out. Understandably, this was a best-seller when first published in Great Britain. Copyright 2012 Booklist Reviews.

Yes, you'll love Bob the Cat, the way you loved Marley, Oogy, and Dewey. London street musician Bowen was barely scraping by when he found the very sick, marmalade-striped feline in the hallway of his apartment building and nursed him back to health. Bob stuck it out, bonding with Bowen, and their artlessly told story was a No. 1 London Times best seller. There's even a film version planned, so buy up.

When recovering heroin addict and London street musician Bowen discovered an orange tomcat shivering in a dark hallway, he did what any animal lover would do. He took in the injured cat, nursed him back to health, and gave him a name—Bob. But what started as a kind gesture and a temporary arrangement became the seed of an unbreakable bond between human and feline. With stark honesty, Bowen tells the story of how Bob became his family, allowing the struggling busker to open his heart in ways he hadn't before. Bowen never expected to find his best friend—and, as it turns out, his salvation—in a street cat. VERDICT A heartwarming, insightful read about two lost souls who find each other, this book, a No. 1 London Times best seller, is not to be missed for fans of Lisa J. Edwards's A Dog Named Boo and Gwen Cooper's Homer's Odyssey. An inspiring story of healing, redemption, and, perhaps most important, the transformative powers of friendship. [See Prepub Alert, 1/25/13.]—Melissa Culbertson, Homewood, IL

Bowen isn't exaggerating; when he met a stray ginger tomcat (whom he named Bob after the creepy character on Twin Peaks), he was estranged from his family and recovering from heroin addiction, supporting himself as a street musician in London, and depending on the kindness of strangers. His chance encounter with Bob in 2007 changed everything. The injured animal attached himself to Bowen, and quickly proved more than just an emotional asset; in the competitive world of busking, passersby began donating more money after Bob took up position next to Bowen's open guitar case. With Bob's friendship bolstering his spirits, and after a warning from the police, Bowen shifts to real work, selling the charity magazine Big Issue and getting off methadone. Despite the grimmer passages in the book—a run-in with a vicious dog, tension with fellow Big Issue vendors that lead to serious consequences—the book is positive on the whole. Bob becomes an Internet celebrity via YouTube videos taken by passerby, and Bowen reconciles with his mother and returns home to Australia for a cathartic visit. Given Bowen's inherent decency, he might well have turned things around even without his feline friend, but he convincingly makes the case that Bob was the cat-alyst. Agent: Mary Pachnos, Aitken Alexander Associates. (July)

Cat daddy: what the world's most incorrigible cat taught me about life, love, and coming cleanGalaxy, Jackson

Dewey: the small-town library cat who touched the worldMyron, Vicki

Pack of two: the intricate bond between people and dogsKnapp, Caroline, 1959-2002

Strays: a lost cat, a homeless man, and their journey across americaCollins, Britt

Homer's odyssey: a fearless feline tale, or how I learned about love and life with a blind wonder catCooper, Gwen, 1971-

Chicken soup for the soul: what I learned from the cat : 101 stories of feline life, love and lessonsCanfield, Jack, 1944-

You had me at woof: how dogs taught me the secrets of happinessKlam, Julie