The coldest girl in Coldtown / by Holly Black. 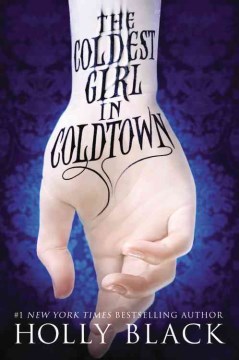 *Starred Review* What happens in Coldtown stays in Coldtown, because once anyone enters this Vegas-like prison for vampires and their infected human pets, there's little chance of leaving it. After a fairly ordinary high-school party, Tana awakens to discover that she is surrounded by the corpses of her friends and classmates, who have all been drained of blood. While trying to leave, she finds her ex-boyfriend, Aidan, tied up but still alive, his eyes intense with the infection that will fully "turn" him if he receives the human blood he craves. Tana is saved from Aidan's bite by a mysterious, red-eyed boy, Gavriel, who also materializes in the party's gruesome aftermath. With hungry vampires scraping at the door, she escapes with both guys in tow to find a way to save them all: by somehow making it in—and out—of Coldtown. In this novel, inspired by her short story of the same name, Black returns with another dark, fast-paced thriller starring a sharp-witted, brave girl who does all the right things when faced with monsters. With rapid-fire dialogue, lavish details, and a wildly imagined world, this will enthrall Black's fans from start to finish and leave them hoping for another bone-chilling, vicarious tour of Coldtown.HIGH-DEMAND BACKSTORY: Vampires plus reality TV plus romance plus Holly Black (plus a multiplatform marketing campaign) equals a potential mega-bestseller that fans are already waiting for. Copyright 2013 Booklist Reviews.

After losing her mother to vampirism, Tana keeps her distance until she wakes up to a house littered with the drained corpses of her friends. The only other survivors are her charming but cheating ex-boyfriend Aidan and beautiful, mysterious vampire-guy Gavriel. Black's compelling prose, descriptive yet direct, conjures a modern gothic world populated by cruel immortals, desperate humans, and hardscrabble survivors.

In an alternate here-and-now, vampires are sequestered in "Coldtowns" guarded by barbed wire and Homeland Security. Live feeds from inside the Coldtowns broadcast the glamorous Eternal Ball with its celebrity vampire hosts, attracting thrill-seekers who are welcomed inside but can never leave. After losing her mother to vampirism, Tana keeps her distance until she wakes up from a party one morning to a house littered with the drained corpses of her friends. The only other survivors are her charming but cheating ex-boyfriend Aidan, left infected and tied to a bed, and beautiful, mysterious vampire-guy Gavriel, chained beside him. Fighting her instinct to run, Tana compels herself to help them get to the nearest Coldtown. Inside, the town is more ghetto than glamour, and Tana becomes entangled in a deadly vampire feud. Black's compelling prose, descriptive yet direct, conjures a modern gothic world populated by cruel immortals, desperate humans offering themselves as food, and a few hardscrabble survivors. Tana is a winning heroine, by turns staking killer vampires and giving herself over to Gavriel's deep, smoldering kisses. As in previous works (The Poison Eaters & Other Stories, rev. 5/10; the Good Neighbors books, rev. 1/09, 1/10), Black displays her gift for channeling the dark side, seeming to wake the very shadows around us. lauren adam Copyright 2013 Horn Book Magazine.

In Black's exquisitely imagined contribution to vampire lore, the creatures have shaken off centuries of clandestine existence and gone public, turning thousands into bloodsuckers like themselves. In an attempt to control their spread, the U.S. government has restricted vampires to ghettolike Coldtowns, where a glamorous, high-octane culture has developed, broadcasting its debauched parties to the world and creating a subculture of humans who fetishize eternal life and long to be turned themselves. Seventeen-year-old Tana wakes up after a wild night of partying to discover that almost everyone in attendance has been killed by vampires, "dried blood crusted on their clothing like rust... dotting their skin like freckles." Wandering through the carnage, she finds her infected ex-boyfriend, Aiden, and a mysterious, half-mad vampire named Gavriel chained in a bedroom. Escaping the massacre, Tana drives them to the nearest Coldtown, knowing that if she enters, a quick death might be the best outcome. Replete with grisly violence, an intriguingly complex take on the mechanics of vampirism, and well-developed and memorable characters, this superior, dread-soaked tale will satisfy vampire addicts of all ages. Ages 15–up. Agent: Barry Goldblatt, Barry Goldblatt Literary Agency. (Sept.)