If you could be mine / by Sara Farizan. 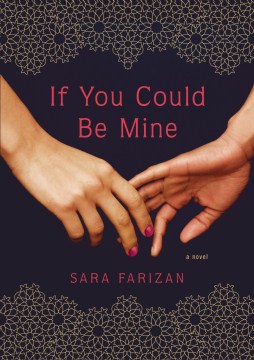 *Starred Review* Teens Sahar and Nasrin have loved each other since they were young girls, but homosexuality is a crime in Iran, and the two girls could be severely punished, even executed, for their romantic love for one another. When an arranged marriage for Nasrin threatens the girls' secret relationship, Sahar vows to take action, but what can she do? Desperate, she decides to have sex-reassignment surgery to become a man so that she can marry her friend. Surprisingly, such surgery is legal in Iran and even paid for, at least in part, by the government, and Sahar also has the caring support of a transsexual friend. Still, will she be able to follow through, and, if not, what will the future hold for the two devoted friends? Farizan's first novel is an accomplished and compassionate look at a heartbreaking situation and the possibility of an unlikely but plausible solution. Throughout, the author presents a groundbreaking, powerful depiction of gay and transsexual life in Iran and its similarities to and differences from that of the West. An intimate look at life in modern-day Iran and its surprising Westernization, even though much of this culture is clandestine. Copyright 2013 Booklist Reviews.

Seventeen-year-old Sahar has been in love with her best friend Nasrin for years. But the girls live in Iran, where their love is illegal. Farizan imbues characters and relationships with depth and complexity. First love is the heart of the matter here; even as readers learn about an unfamiliar culture, they will recognize the universal dynamics of a struggling relationship.

Seventeen-year-old Sahar has been in love with her best friend Nasrin for years, but the girls live in Iran, where their love is illegal. That hasn't kept them from being together, but now Nasrin has accepted a marriage proposal, and both girls must face the untenable future of their relationship. Sahar, a serious student and rule-follower, starts spending time with her cousin Ali and his underground community of criminals and misfits. Her plan, inspired by her new friends—to pretend to be transgendered (sexual reassignment, while stigmatized, is legal) in order to stay with Nasrin—is not so much the center of the story as the catalyst for the complicated social drama that unfolds. Farizan imbues characters and relationships with depth and complexity, especially when it comes to the cracks in Nasrin and Sahar's romance that have nothing to do with restrictive laws and everything to do with Nasrin's self-absorption. First love is the heart of the matter here; even as readers learn about an unfamiliar culture, they will recognize the universal dynamics of a struggling relationship. Meanwhile, secondary characters, especially Ali and his compatriots, provide intriguing and sometimes disturbing cameos that illuminate a variety of circumstances and individuals at the margins of society. A unique and thoughtful debut. claire e. gros Copyright 2013 Horn Book Magazine.

This provocative coming-of-age story takes place in contemporary Iran, where the sight of a woman's elbows can provoke police action; homosexuality, "a bargain made with the devil," carries threats of beating and hanging; but being transsexual is recognized by the government as a treatable illness. Seventeen-year-old Sahar, who has wanted to marry her best friend Nasrin since they were six years old, dreams of living openly with her lover. Nasrin prefers to accept an arranged marriage, while intending to continue their illicit affair. Exposed to a world of sexual diversity by her gay cousin and made desperate by Nasrin's impending marriage, Sahar explores the one legal option for the two of them to be together: her own sex reassignment surgery. Throughout this strong debut, Farizan weaves in details of daily Iranian life, exposing the various opportunities available to people depending upon their academic prowess, financial status, social class, and sexuality. Within a rigid societal structure, her fleshed-out characters wrestle with depression, hope, complacency, and risk, and live out the consequences of their choices. Ages 14–up. Agent: Leigh Feldman, Writers House. (Aug.)

Alice and Freda forever: a murder in MemphisCoe, Alexis

The upside of unrequitedAlbertalli, Becky

Late to the partyQuindlen, Kelly

If I was your girlRusso, Meredith