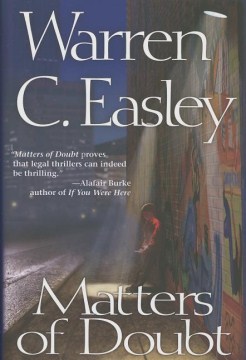 After his wife's death several years ago, Cal Claxton, an L.A. prosecutor, relocated to Oregon. Now he's a small-town lawyer taking whatever cases turn up at his door, like, for example, the case of a boy who wants Cal to prove who killed his mother (the boy says he already knows who did it). Cal's first instinct is to turn the case down—the murder took place a long time ago, the deceased's remains only recently turning up—but Cal soon finds he's intrigued by the circumstances surrounding the woman's murder (she was a newspaper reporter), and he agrees to help the boy. But when the boy's suspect turns up dead, and the boy himself is a person of interest for that crime, Cal wonders if he made the wrong decision. This is a strong debut for Easley, who, although he isn't a practicing lawyer himself, writes like he knows what he's talking about. Cal, carrying a heavy load of guilt over the circumstances surrounding his wife's death, is a well-designed, sympathetic character—definitely capable of carrying a series. Copyright 2013 Booklist Reviews.

Attorney Cal Claxton has relocated from Los Angeles to a small town near Portland, OR, and is adapting to a quieter lifestyle. Or he was, until a young muralist from Portland named Danny Baxter (better known as Picasso) comes to him for help. Turns out Picasso's mother, investigative journalist Nicole Baxter, disappeared when her son was quite young, sending him into a rabbit warren of foster homes and, eventually, life on the street. Now, eight years later, Nicole's body has been recovered from the bottom of a reservoir. As the cold case thaws, Nicole's former boyfriend is murdered, and Picasso is the prime suspect. Cal, ever the Good Samaritan, wades into a complicated story filled with high-profile bad guys and vulnerable innocents. VERDICT Easley's legal thriller debut, the first in a projected three-book series, is perfect for John Grisham fans. Although heavily draped in character stereotypes and social issues, his briskly paced and satisfyingly complex David vs. Goliath story will hold readers rapt from start to finish.

Easley's unremarkable debut introduces Cal Claxton, a former L.A. prosecutor who has moved to Oregon wine country following his wife's death and is now content to handle small-time cases. But when a tattooed Portland street kid, Danny "Picasso" Baxter, who looks about 20, asks Cal to help solve his mother's murder, Cal reluctantly agrees to do so. Picasso tells Cal that his mother, Nicole, disappeared mysteriously eight years earlier and that her skeletal remains were recently found in the Deschutes River. Picasso is sure the killer is Mitch Conyers, a sleazy Portland businessman who was once his mother's boyfriend. Cal digs into Nicole's life and work—she was a reporter for The Oregonian—and finds unsettling connections to all manner of deceitful dealings involving some of Portland's most notable citizens. Easley brings alive the world of street kids and the alternative social groups they form, but the mystery, such as it is, lacks punch. (Sept.)

The day the music diedGorman, Edward