The land of dreams / Vidar Sundstøl ; translated by Tiina Nunnally. 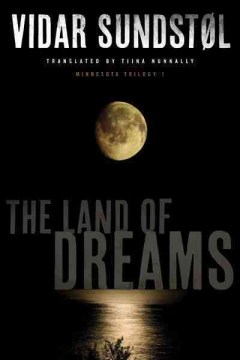 *Starred Review* Winner of the Riverton Prize for best Norwegian crime novel, this transplanted Scandinavian thriller is set in Minnesota on the shores of Lake Superior and is the first book of a trilogy. Lance Hansen is a police officer with the U.S. Forest Service, but his real passion is local history. While making his morning rounds, he finds the body of a young man who has been bludgeoned to death. No one can recall a murder in this part of Minnesota, and, indeed, Hansen has to go back almost 100 years to find another—oddly enough, in the same area. Hansen calls in the local sheriff, who quickly refers the case to the FBI. The dead man, it turns out, was a Norwegian tourist, and the friend he was traveling with is the prime suspect. FBI agent Bob Lecuyer flies in a detective from Oslo, Eirik Nyland, who befriends Hansen. Hansen is just as intrigued by the story of a murdered Native American in the 1800s as he is in the current murder, and finds some ominous ties to his own family. The landscape is a big part of the story, as is the history of the area, making this a fascinating look at Minnesota as well as a suspenseful thriller. The novel will certainly appeal to Scandinavian crime-fiction fans, but the vivid Minnesota setting should expand its audience considerably. A fine mix of history and mystery. Copyright 2013 Booklist Reviews.

Lance Hansen, a U.S. Forest Service law enforcement officer, amateur archivist, and local historian, discovers a blood-smeared nude despondent Norwegian tourist when he is called in to investigate an unauthorized campsite on the north shore of Lake Superior. Nearby, Hansen also finds the brutally murdered corpse of the tourist's companion. Because a Norwegian died on federal land, Eirik Nyland, an Oslo detective, is flown in from Norway to assist the FBI with the investigation. As Hansen simultaneously examines the ties between this killing and the century-old murder of an Ojibwe man, he must choose between justice and family loyalty. VERDICT Winner of the Riverton Prize for best Norwegian crime novel of the year and nominated for the Glass Key for best Scandinavian crime novel of the year, Sundstøl's superb first entry in his acclaimed Minnesota trilogy, now published for the first time in the United States, interweaves a Nordic noir flavor with the history and heritage of Minnesota's Cooke County. Nunnally's translation is accessible to an American audience. Fans of Scandinavian crime novels and mysteries with a Minnesota setting will enjoy this chilling psychological thriller. [The other two novels in the trilogy, Only the Dead and The Ravens, are forthcoming from the University of Minnesota Press.—Ed.]—Russell Michalak, Goldey-Beacom Coll. Lib., Wilmington, DE

Norwegian crime novelist Sundstøl's stellar psychological thriller, the first in his Minnesota Trilogy, stunningly evokes the North Shore of Lake Superior and its people—Norwegian, Swedish, and Finnish settlers, as well as Objibway Native Americans. When 46-year-old forest ranger and amateur historian Lance Hansen checks out a report of someone illegally pitching a tent near the lake, he comes across a distraught naked man smeared with dried blood and close by the body of the man's murdered companion, both apparently Norwegian tourists. Lance soon gets entangled in a web of intrigue, revenge, and old unresolved conflicts—not the least agonizing of which is with his brother, Andy, whom Lance saw near the murder site before discovering the body. Sundstøl, who lived two years on the North Shore, makes dreams his central metaphor for the monsters that old Vikings and the Ojibway both knew lurked at the base of the universe and in the depths of human hearts. Like his detective Eirik Nyland, brought from Oslo to investigate the crime, Sundstøl is an outsider, and as such, he clearly recognizes the violent energy beneath the placid surface of Cook County, Minn. Nunnally's convincing translation helps bring it all to unforgettable life. (Sept.)

A cold day in ParadiseHamilton, Steve, 1961-