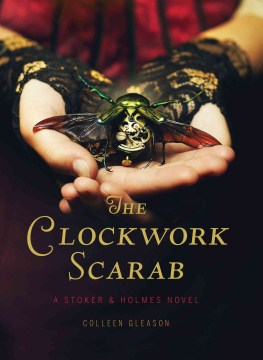 The setup: Mina, niece of Sherlock Holmes, and Evaline Stoker, Bram's sister, are called to the British Museum and told that the princess of Wales wishes them to place their lives and honor at her disposal. That means forming a partnership to discover why young society women are dying. Mina and Evaline are willing, but there are a few catches. One, they don't care for each other. Two, each has personal problems. Evaline, a vampire hunter (though unsuccessful) doesn't like blood; Mina feels deserted by her family and unsure of her looks. But these are trifles compared to the crimes being committed. As the duo learns, an enigmatic character, the Ankh, has formed a secret society to reempower the Egyptian goddess Sekhmet. They must join the cult to solve the case. Set in a steampunk London and told in alternating chapters, The Clockwork Scarab is lots of fun. Plenty of action mixes with a hint of romance, and the ancient Egyptian overlay adds atmosphere. The ending doesn't quite satisfy, but it does lead into the next Stoker & Holmes novel, and that's a jolly good thing. Copyright 2013 Booklist Reviews.

In alternate Victorian London, Mina Holmes (Sherlock's niece) and Evaline Stoker (Bram's sister) team up to solve a series of murders. The story veers into sci-fi with the arrival of an unwitting time-traveler boy named Dylan. In this series starter, the fun comes from the voices of the two main characters whose alternating narration includes quick-witted sparring, slowly developing friendship, and grudging admiration.

The geek meets the goth in alternate Victorian London. Mina Holmes (Sherlock's niece, daughter of Mycroft) and Evaline Stoker (Bram's teenage sister) team up, under the tutelage of Irene Adler, to solve a series of murders involving society girls, the British Museum, and ancient Egyptian artifacts. The story veers into sci-fi with some steampunk elements and a modern-day boy named Dylan, who is an unwitting time traveler and possible love interest for the always-analytical Mina (he's one of two potential beaux, as young Scotland Yard investigator Inspector Grayling also intrigues her; for Evaline's part, a mysterious guy called Pix captures her attention). In this first series entry, Gleason lays the foundation for future volumes, but there's still a lot of ground to cover: for example, even though Evaline's vampire-hunting legacy is alluded to, there's not a fanged creature in sight; also, we don't know much about Dylan's backstory. The mystery itself is not Conan Doyle-caliber: as is often the case with latter-day Holmes adventures, there's a supernatural component, and the details are murky. But the fun comes from the voices of the two main characters whose alternating narration includes quick-witted sparring, slowly developing friendship, and grudging admiration for each other's very different strengths, along with cameo appearances by their famous relatives. elissa gershowitz Copyright 2013 Horn Book Magazine Reviews.

Adult author Gleason (the Gardella Vampire Chronicles) brings the same penchant for mixing the historical, paranormal, and romantic to this first book in the Stoker & Holmes series. The narrative switches between two young women living in 1889 London: observant and cerebral Alvermina Holmes (she goes by Mina for obvious reasons), the niece of Sherlock Holmes; and Evaline Stoker, the headstrong (and physically strong) younger sister to Bram, and member of a proud line of vampire hunters. The girls' differing temperaments make for some bristly interactions as they investigate the connection between the disappearance of a young woman and several recent murders. Gleason's premise should be "too much"—in addition to the literary conceit involving the Holmes and Stoker families, the story rapidly expands to include steampunk, alternate history, time travel, and Egyptian mythology—and yet it all works. Few answers are offered in this outing, but the author's writing exudes energy, romance, and humor, and she gives her heroines strong, vibrant personalities as they puzzle out the expansive mystery unfolding before them. Ages 12–up. Agent: Maura Kye-Casella, Don Congdon Associates. (Sept.)