The kindred of darkness : a vampire kidnapping / by Barbara Hambly. 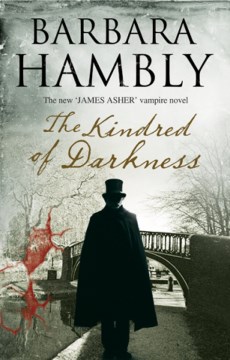 England, 1913. James Asher, linguistics professor and former intelligence operative, is in Venice, at a conference. Back home, strange doings are afoot: the Ashers' baby girl is kidnapped by Grippen, the leader of London's vampires, who wants Lydia Asher to do a job for him: find an out-of-town vampire who's been nosing around Grippen's territory. And Grippen, who's a pretty powerful bloodsucker, has reason to be worried about Zahorec, the newcomer: Zahorec is looking for the famed Book of the Kindred Darkness, which supposedly bestows on its possessor virtually limitless power over other vampires, although some people believe the book doesn't actually exist. Hambly gives us a good look at Lydia Asher here, positioning her as a strong, resourceful lead character (although James does eventually put in an appearance, about a third of the way into the book). Another fine entry in this always-entertaining series. Copyright 2014 Booklist Reviews.

While vampire hunter James Asher is away in Venice, his wife, Lydia, makes the awful discovery that Grippen, the Master of London, has stolen her child. Grippen wants to coerce Lydia into helping him find a rogue vampire who has been hunting recklessly on his turf. As Lydia races to find the mysterious vampire, with the eventual aid of James and their occasional vampire ally Don Simon Ysidro, she must contend with human and vampiric forces. As the search progresses, everything appears to be tied to The Book of the Kindred of Darkness, an ancient text that purports to tell the secrets of the undead. VERDICT Although the pace lags in places, Hambly, who also writes the historical mystery series featuring freed slave Benjamin January, imbues this historical horror novel with plenty of thrills and authentic historical details for a satisfying entry in the series (following 2012's The Magistrates of Hell).

Hambly (The Magistrates of Hell) deftly draws the reader into 1913 London's undead social scene in all its complexity in the standout fifth entry of this dark, lush series. James and Lydia Asher have the ability to track the undead. Their unsteady truce with the local vampires is shaken when Grippen, Master of the London Nest, kidnaps their infant daughter, ordering them to find a foreign interloper, Damien Zahorec, without looking too closely into his secret books of vampire-controlling lore. As James sneaks through the streets seeking information, Lydia tracks Zahorec while escorting her debutante niece to parties, in scenes that dance delightfully close to period romance. The emotional triangle between James, Lydia, and their mysterious friend Don Simon Ysidro will please those who look for swooning romanticism in their vampire fare. Hambly's clever, driven characters are creatures of action, and will satisfy those who enjoy a well-articulated, heart-pounding mystery. (Mar.)