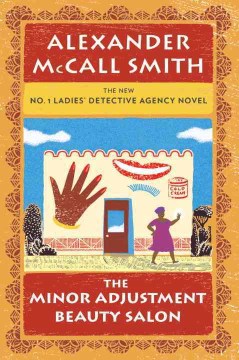 *Starred Review* The titles of many of the No. 1 Ladies' Detective Agency novels (this is the fourteenth) often have a wonderfully cheery tone. Think of The Full Cupboard of Life, for example, or Tea Time for the Traditionally Built. The latest title is brilliant in its hopefulness, implying, as it does, that a person may only be a mere tweak away from beauty. This hopeful attitude is exemplified by Mma Ramotswe, the owner and operator of Botswana's only detective agency, who resolutely tackles the problems people bring to her in her small, out-of-the-way office under an acacia tree. The clients' problems showcase the usual suspects of greed, envy, sloth—all the vices that cause trouble for others. This time, the owner of the nearest town's new beauty salon receives a tiny thing, a feather from a ground hornbill bird. But this artifact is a traditional way of conveying hate. This is followed by a highly effective smear campaign. The other case Mma Ramotswe works on here concerns an heir to a great cattle farm who may actually be an imposter. Mma Ramotswe must track the truth alone because her assistant Mma Makutsi is absent (no plot spoiler here). As usual, these novels are only a bit about actual mysteries. They're leisurely, wonderfully crafted descriptions of life in the agency and at home, the beauties of Botswana, and the joys, big and small, of life. This latest is, especially, a tribute to enduring friendship. Copyright 2013 Booklist Reviews.

Mma Ramotswe is back, investigating a series of curious incidents that seem designed to put the Minor Adjustment Beauty Salon out of business. No. 14 for the No. 1 Ladies' Detective Agency; with a reading group guide and a ten-city tour.

A reader favorite, the irresistible Precious juggles two cases with her usual aplomb. She has more trouble grappling with changes within her own agency in her 14th adventure (after The Limpopo Academy of Private Detection). [See Prepub Alert, 5/13/13.]

The No. 1 Ladies' Detective Agency could be about to lose its #2 investigator in Smith's endearing 14th installment of the bestselling Botswana-set series (after 2012's The Limpopo Academy of Private Detection). One hardly needs the renowned deductive powers of agency head Mma Precious Ramotswe to notice the growing bulk beneath the increasingly voluminous garb of recently married second-in-command Mma Grace Makutsi. But the normally frighteningly efficient assistant stays mum as the pair try to establish whether the young "nephew" attempting to claim a dead man's estate is in fact an imposter. Meanwhile, Mma Ramotswe allows herself to be snookered into figuring out who's mounting a smear campaign against the titular beauty establishment. The two story lines work as serviceably as Mma Ramotswe's doughty white van to propel the story forward, but the book's appeal lies less in deduction than irrepressible characters, intriguing local lore, and bone-deep love of Africa. Agent: Robin Straus, Robin Straus Agency. (Nov.)