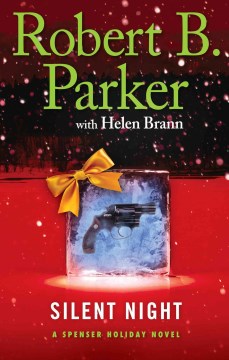 The late Robert B. Parker was apparently surrounded by people eager either to keep his Spenser legacy going, or to keep the profits flowing. Following the publication of new installments of Parker's various series written by different authors, we now have an unfinished Spenser novel, a Christmas story, that has been finished by Brann, the author's agent. This is a shortish but fairly satisfying Spenser tale set in the run-up before Christmas and featuring many of the signature elements of the beloved series: we have Spenser's cooking preparations, always a marvelous part of his books, and appearances by his longtime love, Susan Silverman, and best friend, Hawk. The mystery on which it all rests starts with a scared street kid showing up in Spenser's Boston office. Spenser quickly determines that someone is using intimidation tactics to drive street kids out of their group home. The novel is long on atmosphere, a bit off when it comes to dialogue, and almost totally lacking in detective methods, making the reader wonder just how much of the book Parker wrote. Readers will decide if this last Christmas story is a gift or a stickup. Copyright 2013 Booklist Reviews.

Parker's longtime literary agent, Brann, completed this novel that was left unfinished when Parker died in 2010. It's December in Boston, and Spenser is working in his office when he's visited by a young homeless boy named Slide, who relays a message that Jackie Alvarez wants to meet with him. Jackie runs Street Business, an organization that houses and tries to find jobs for homeless boys. The Street Business kids are being threatened, and Jackie wants Spenser to help get to the bottom of it. Spenser, with some help from his buddy Hawk, soon realizes that the threat is much more dangerous than he expected. With the stakes suddenly higher than ever and Christmas just days away, Spenser prepares for a showdown. VERDICT This is the perfect holiday treat for crime readers needing another Spenser fix. [See Prepub Alert, 4/29/13.]

Brann, the longtime agent of Robert B. Parker (1932–2010), does a seamless job of completing the unfinished manuscript of what's billed as a Spenser holiday novel. The Boston PI gets a visit from an 11-year-old street kid, Slide, who asks that Spenser help out Jackie Alvarez, the director of an unlicensed shelter, Street Business, funded by Jackie's affluent brother, Juan. Jackie, who's been receiving threats, fears that someone is trying to close him down. Spenser takes the case, of course, enlisting his longtime muscle, Hawk, to watch his back while he gets into the requisite number of violent confrontations on the way to achieving justice. Love interest Susan Silverman lends support. As in Parker's later books in the series and Ace Atkins's pastiches, the storyline and characterizations offer more of the same with few surprises, but diehard Parker fans will be delighted. Agent: Helen Brann, Helen Brann Agency. (Oct.)

The fat man: a tale of North Pole noirHarmon, Ken

Quite ugly one morningBrookmyre, Christopher, 1968-