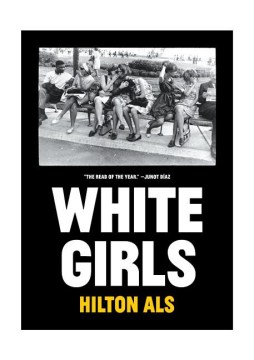 With roots in Barbados and Brooklyn and a deep immersion in the endless identity issues attendant upon being a gay man of color, bold, versatile critic and New Yorker staff writer Als continues the inquiry he launched in his first book, The Women (1996). Here's a clue to the layered and spiked complexities of this essay collection: one of the "white girls" Als portrays is Truman Capote, another is Michael Jackson as well as Flannery O'Connor and silent film star Louise Brooks. Jennifer Lee, Richard Pryor's widow, appears in Als' bristling portrait of the brilliant performer. He also portrays with fresh insight Marshall Mathers III, that is, Eminem. Als is pyrotechnic, lifting off the page in a blast of stinging light and concussive booms that somehow coalesce into profound cultural and psychological illuminations. More covertly scorching is the long, wrenching essay "Tristes Tropiques," an exploration of love and friendship, fear and fascination during the AIDS epidemic. Whether his subject is his mother, himself, or seminal artists, Als is a fine, piercing observer and interpreter, a writer of lashing exactitude and veracity. Copyright 2013 Booklist Reviews.

Only Als (theater critic, The New Yorker; The Women) could write about ringworm—"my cruddy friend," "a dark flower," "an erotic 'pain' I could not wait to get my hands on"—and make it sound good. His first book since 1998 contains 13 pieces, most of them previously published, in which he meanders through fiction, criticism, and memoir along the axes of race, gender, and sexuality. He touches on aspects of his own life and on various cultural figures: Truman Capote, Flannery O'Connor, Malcolm X, Eminem, Michael Jackson, André Leon Talley, Louise Brooks, and Richard Pryor, among others—all examined as "white girls" or in relation to them. (Als asks in "Tristes Tropiques," "How could one be a white girl and hate it?") On writing about pictures of lynching victims, he admits, "I have become a cliché" by answering white America's request to "Tell me about yourself, meaning, Tell me how you've suffered. Isn't that what you people do? Suffer nobly, even poetically sometimes? Doesn't suffering define you?" VERDICT Suffering does not define Als; his art—loping, loopy, yet astonishingly precise language—does. This is a book that readers will want to spend the rest of their lives with: a searching, insistent, and thoroughly wise collection.—Molly McArdle, Library Journal

New Yorker drama critic Als returns with his first book since 1996. This collection includes essay, memoir, and fiction—all touch on questions of identity, race, and gender. Fluid and fluent. (LJ 9/1/13)

New Yorker critic Als (The Women) delivers his first book in 15 years—a mesmerizing and varied collection of essays, some previously published. His eponymous "white girls" include Louise Brooks, Flannery O'Connor, Truman Capote, Richard Pryor, Malcolm X, Michael Jackson, Eminem, and others. Using his subjects as a springboard to analyze literature, photography, films, music, television, performance, race, gender, sexual orientation, and history, Als offers wry insights throughout. For example, he notes how O'Connor's readers often overlooked "the originality and honesty of her portrayal... of Southern whiteness as it chafed under its biggest cultural influence—Southern blackness." In his opening essay, "Tristes Tropiques," Als revels in his relationship ("twinship") with the unnamed SL ("Sir or Lady"), noting that the relationship defies categorization in an America that "is nothing if not about categories": "There was no context... to understand us... two colored men who were together, not lovers, not bums, not mad." Highly attuned to popular culture, Als is a writer of many moods—meditative, sardonic, haunting, funny, reflective, and unconventional. Whether agonizing over photos of black lynchings (and realizing that the true meaning of the N-word is a "slow death"), or constructing a critique of Virginia Woolf in the voice of Richard Pryor's sister, he proves to be a compassionate writer looking for unity—even if it can't always be found. Agent: Jeffrey Posternak, Wylie Agency. (Nov.)

Defining moments in Black history: reading between the liesGregory, Dick

Why I hate Abercrombie & Fitch: essays on race and sexualityMcBride, Dwight A.

This will be my undoing: living at the intersection of black, female, and feminist in (white) AmericaJerkins, Morgan

Between the world and meCoates, Ta-Nehisi

We should all be feministsAdichie, Chimamanda Ngozi, 1977-

Thick: and other essaysCottom, Tressie McMillan