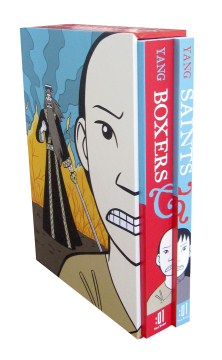 Yang's latest graphic novels are a "diptych" of books set during China's Boxer Rebellion of the early twentieth century. Boxers follows Little Bao, a village boy with an affinity for opera; Saints centers on Four-Girl, an unloved and unwanted child who perfects a revolting "devil-face" expression. They meet fleetingly as children, foreshadowing their respective roles in the conflict to come. Little Bao, with the help of an eccentric kung fu master, learns to harness the power of ancient gods, forming the Society of the Righteous and Harmonious Fist in an attempt to rid China of the "foreign devils" who spread Christianity across the country. Four-Girl sits squarely on the other side of the rebellion. After repeat visits from Joan of Arc in mystic visions, Four-Girl comes to the conclusion that she, too, is destined to become a maiden warrior. She converts to Christianity, takes the name Vibiana, and strives to protect China against the Little Bao-led uprising. The inevitable showdown between the two characters leads to a surprising and bleak conclusion. While neither volume truly stands alone (making for a significant price tag for the whole story), Yang's characteristic infusions of magical realism, bursts of humor, and distinctively drawn characters are present in both books, which together make for a compelling read. sam bloom Copyright 2013 Horn Book Magazine Reviews.

History clashes with the idealizations of fiction in these interlocked tales of teens caught up in China's Boxer Rebellion between 1897 and 1901. Who is "right"? The Western missionaries who preach the Christian gospel but whose ranks include bandits and exploiters? Or the boxers, who call upon their pagan gods to help kill the Christian intruders and their Western protectors? Little Bao is a peasant lad whose village suffers at the hands of the missionaries. Inspired by visions, he joins in violent rebellion with thousands of other angry and hungry Chinese who deplore the greedy Westerners. But in another village, unwanted Four Girl finds a home and new name—Vibiana—with Christian missionaries. Through Bao and Vibiana, we see how no crusade is "pure." VERDICT This excellent two-part graphic novel teaches history through a double-lens narrative, showing how factors interact to create unwanted tragedies by both sides. The winsome, magical-realist art of Yang (American Born Chinese) plays ironically against the bloody conflict enhanced by artist Lark Pien's colors. Heartbreaking and sometimes funny, this boxed set is for teens and adults interested in international politics and people's rebellions.—M.C.

China's Boxer Rebellion is the unlikely backdrop for this graphic treatment of young villagers on the opposite sides of history. Bao wants to drive out the white devils that poison his country with opium and Christianity. Four-Girl is an unwanted daughter who finds purpose in the missionary life. Their stories collide in a moment of grace that could only be penned by the Printz Award–winning author of American Born Chinese. (See Best Graphic Novels, p. 31.) (c) Copyright 2013. Library Journals LLC, a wholly owned subsidiary of Media Source, Inc. No redistribution permitted.

Boxers reviewWith a superbly executed triptych of graphic novels, Yang (American Born Chinese) employs parallel storylines to represent two opposing Chinese experiences during the Boxer Rebellion at the turn of the 20th century. Raised in an impoverished rural village, Little Bao and his older brothers embark on a crusade to save China from Christian missionaries and other foreign devils who are perceived to be the cause of their country's woes. What begins as a righteous march to the capital, bolstered by Little Bao's recurring visions of a pantheon of Chinese gods, quickly escalates in violence and rhetoric. By the time Little Bao and his amassed army, dubbed the Society of the Righteous and Harmonious Fist, reach the occupied city of Peking, morale is strained and the line between right and wrong has blurred. Yang doesn't shy from the ensuing bloodshed (beheadings are not uncommon), yet moments of lightheartedness and potential romance humanize the combatants, even as their campaigns take on zealous dimensions. Yang's artwork and storytelling are sober and accessible, and his character-driven approach brings compassion to a complex historical clash. Ages 12‚up. Agent: Judith Hansen, Hansen Literary Agency. (Sept.) Saints reviewIn the companion to Boxers, Yang shifts focus to Four-Girl, a mistreated Chinese girl who decides to become a Christian despite the heavy cultural stigma it carries. Although her initial reason for converting is misguided (she's mainly a fan of the snacks she receives), she eventually embraces the religion and, inspired by visions of Joan of Arc, is spurred to become a maiden warrior for God. To prove her faith, Four-Girl (newly christened Vibiana) charges herself with defending Peking, which has become a refuge for foreigners and Christians from the approaching Society of the Righteous and Harmonious Fist. As in Boxers, the climactic battle is brutal; established characters meet their demises quickly and unceremoniously. Read separately, the books are honest and revealing character studies of two differing Chinese perspectives during the Boxer Rebellion. Together, they resonate electrically, partly due to their mirrored plots, but more so for capturing the historical context and dueling psychologies (the group vs. the self, national pride vs. spiritual pride) that underlie this political and cultural conflict. Ages 12 up. Agent: Judith Hansen, Hansen Literary Agency. (Sept.)