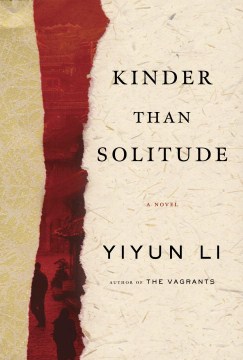 Boyang enjoys his affluence in China's new economy, playing sugar daddy and driving a luxury car. When an old friend, Shaoai, dies 21 years after she's poisoned, his thoughts return to the Beijing of his childhood. He shares a burden of guilt with Ruyu and Moran, girls who grew up alongside him and have since fled to America; all three played roles in Shaoai's poisoning. Li's fourth work of fiction gives readers the trappings of a murder mystery with none of the dull formula. Instead, she burrows deeply into the minds of her characters. Her prose, by turns sumptuous and austere, is utterly precise, whether describing a crematorium, a roasted yam, or midwestern snowfall. A brilliant, sorrowful, and unpredictable novel. Copyright 2014 Booklist Reviews.

In her first title since she received a 2010 MacArthur "Genius" Fellowship, Li again explores the far-reaching repercussions of a single person's death. While her mesmerizing The Vagrants (2009) revolved around the execution of a young political victim, here, three childhood friends take the spotlight when a fourth dies after a protracted illness. Ruyu, an orphan raised by elderly "grandaunts," is sent to live with Aunt, Uncle, and their acerbic daughter, Shaoai, in Beijing. There, she meets Boyang and Moran, who live in the same residential compound. Just four months later, the three children are implicated in Shaoai's mysterious collapse. Shaoai's long-expected death after 20 years prompts Boyang—now a wealthy divorcée—to contact Moran, a Massachusetts pharmaceutical tester with a PhD determined to care for her ill Midwestern ex-husband, and Ruyu, who sells chocolates and keeps house for wealthy Californians. VERDICT Li's effortless ability to move fluidly in time and place—between minutes or decades and across continents—always with exacting details, gives this novel a shattering immediacy. Discerning readers who appreciated the well-traveled, multicultural virtuosity of Jhumpa Lahiri's Lowland, Chang-rae Lee's The Surrendered, and Abraham Verghese's Cutting for Stone will find rewarding satiety in Solitude.—Terry Hong, Smithsonian BookDragon, Washington, DC

Li (The Vagrants) became one of the writers in the New Yorker's prestigious "20 Under 40" list, largely on the strength of her widely anthologized short stories, but in her second novel we follow a group of friends who came of age in Tiananmen Square era Beijing; there's the preternaturally close Boyang and Moran, the distrustful orphan Ruyu, thrust into their midst after a devoutly Catholic upbringing, and, at the center of their affections, the political dissident Shaoai. But their circle is ruptured when Shaoai is poisoned by one of their number. Shaoai lives—barely—for 21 more years, but her contemporaries flounder in the interim. Boyang has become a playboy and serial "sugar daddy," the once-outgoing Moran is a divorcée and spiritual shut-in living in America, and Ruyu, also an emigrant to America, is housekeeper to an upscale family with an inflated idea of their benevolence. As word of Shaoai's death spreads and Boyang urges the others to return to China, each reflects on where their past has left them… and who is the murderer among them. Li is excellent at getting us to distrust her characters, but the tension is stretched too thin to sustain a story that never quite comes alive as either political allegory or sprawling social novel. (Feb.)

When we were orphansIshiguro, Kazuo, 1954-

My sister, the serial killerBraithwaite, Oyinkan

Once upon a riverSetterfield, Diane

Everything I never told youNg, Celeste