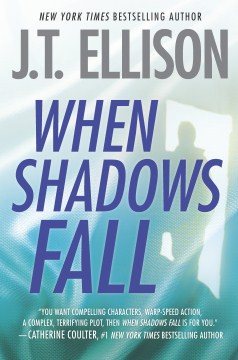 *Starred Review* What at first appears to be a suicide propels Dr. Samantha Owens into a case that will test her resolve and sanity in Ellison's third novel to feature the forensic pathologist. It starts with Owens receiving a letter from the victim—posted before his death—asking her to solve his murder. She is also listed, it turns out, as one of the beneficiaries in the man's will. Having no idea who he is or why he sought out her services, she reluctantly conducts an autopsy and discovers that the death was, in fact, murder. How did he know he was going to be killed? His secret will shock Owens and her colleagues to the core, forcing them to ask hard questions about themselves, their careers, and how something as infallible as DNA can produce the wrong results. The mystery only intensifies as the narrative unfolds, and it's a guarantee that readers will not figure out all of the details before the end. Ellison has crafted a terrific thriller, and fans of forensic mysteries, such as those by Patricia Cornwell, should immediately add this series to their A-lists. Familiarity with the prior books is not necessary to enjoy this one. Copyright 2014 Booklist Reviews.

Dr. Samantha Owens is transitioning into her new job teaching and chairing the forensic pathology department at Georgetown University Medical School when she receives a cryptic letter from a stranger asking her to solve his murder. Hesitant to get involved in fieldwork after recently opting out of law enforcement, Sam ignores the request. When the dead man's will stipulates that Sam perform the autopsy, her curiosity is piqued. The autopsy indicates murder, catapulting Sam and those closest to her into an intense FBI case. In her five harrowing days on the case, Sam uncovers dangerous links among a missing FBI agent, cold-case child abductions, and a suspicious religious cult led by a charismatic female. VERDICT Ellison's third Samantha Owens installment (after A Deeper Darkness and Edge of Black) is a gripping page-turner. Skillfully seasoned with suspense, intrigue, adventure, and a dash of romance, it's essential for suspense junkies. Fans of Patricia Cornwell's Kay Scarpetta books may notice similarities but will find that Ellison puts her own unique spin on forensic investigation.—Mary Todd Chesnut, Northern Kentucky Univ. Lib., Highland Heights

Exceptional character development distinguishes Thriller Award–winner Ellison's third Samantha Owens novel (after 2012's Edge of Black), the best yet in the series. When Sam, now head of Georgetown University Medical School's forensic pathology department in Washington, D.C., receives a letter from a stranger named Timothy Savage asking her to solve his murder, she gets drawn back into her former career in law enforcement. Sam performs an autopsy on Savage, who recently died in Lynchburg, Va., and the examination shows he did not commit suicide, as the police ruled, but was indeed murdered. Meanwhile, Sam and her boyfriend, former Army Ranger Xander Whitfield, become embroiled in a search for a missing child whose disappearance may be related to Savage's death. The suspense builds as Sam and Xander, aided by D.C. homicide detective Darren Fletcher, chase down a host of surprising leads. The author's ability to neatly tie together the mysterious clues helps make this a standout in the romantic thriller subgenre. Agent: Scott Miller, Trident Media Group. (Mar.)