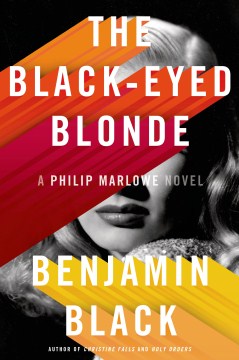 He put out his right hand for me to shake. It was like being given a sleek, cool-skinned animal to hold for a moment or two. That must be Philip Marlowe talking, right? It is, sort of. Black (the mystery-writing pseudonym for Irish writer John Banville) offers a stylish homage to Raymond Chandler in this tightly written caper that picks up Marlowe's life from the point the series ended. Naturally, it begins with a leggy blonde easing her silky body into Marlowe's office chair and spinning a story that turns out to be about half poppycock. Marlowe takes the bait, of course, and begins to search for a con man whose death may have been exaggerated. The plot is nearly impenetrable in classic Chandler fashion, and there are numerous allusions to the earlier books, including the surprise appearance of a character from The Long Goodbye whose presence will either enrage or enthrall devoted fans. The focus, though, as it was for Chandler, is on style and mood, and the Irishman, perhaps surprisingly, nails both. The homage game is a tricky one to play, but Black makes all the right moves. Great fun for Chandlerians. Copyright 2014 Booklist Reviews.

Man Booker prize winner John Banville again changes tack to write as Benjamin Black, here reviving Philip Marlowe. On a hot and draggy day in early 1950s Bay City, CA, a predictably stunning young woman comes to Marlowe's office to ask him to locate her former lover—just the first in a long chain of complicated events. A sharper-edged Marlowe for our time.

The titular black-eyed blonde of Black's tribute to Raymond Chandler is Philip Marlowe's new client, who wants the detective to find a missing former boyfriend. But Marlowe soon learns that the boyfriend is in the morgue, and the case grows more complicated as he searches from the mansions of the city's wealthiest families to the seediest dive bars to discover why this man is so important to his client. As the bodies pile up, Marlowe struggles to separate the lies from the truth, with some grudging help from his few friends in the police department. With perhaps fewer memorable descriptions that characterized Robert B. Parker's Marlowe novels Poodle Springs and Perchance To Dream, Black (A Death in Summer; Vengeance) does deliver a more complex and satisfying mystery than other authors have done in the past. VERDICT This latest incarnation of Chandler's sleuth will appeal to fans of Chandler and Marlowe, but newcomers to one of the first great PIs in crime fiction will find much to enjoy here as well. [See Prepub Alert, 10/15/13.]—Dan Forrest, Western Kentucky Univ. Libs., Bowling Green

Black (the pseudonym that John Manville uses for his crime fiction) isn't the first to tackle the daunting challenge of recreating the distinctive narrative voice of Raymond Chandler's world-weary, mean streets–walking L.A. private eye, Philip Marlowe. Despite Robert B. Parker's lengthy experience in the PI genre, his sequel to The Big Sleep, Perchance to Dream, pales in comparison with Black's pitch-perfect recreation of the character and his time and place. As for the language, Black nails Chandler's creative and memorable similes and metaphors. When Marlowe shakes hands with someone, "It was like being given a sleek, cool-skinned animal to hold for a moment or two." The title character, Clare Cavendish, wanders into Marlowe's office to ask him to trace her lover, Nico Peterson, who disappeared two months earlier. The case appears to wrap up quickly after Marlowe learns that Peterson was the victim of a hit-and-run, but Cavendish has some major revelations in store. While the mystery is well plotted, Black elevates it beyond mere thoughtful homage with a plausible injection of emotion in his wounded lead. Author tour. Agent: Ed Victor, Ed Victor Literary Agency (U.K.). (Mar.)