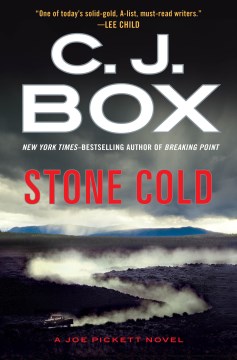 Box's last Joe Pickett novel, Breaking Point (2013), left the reader wondering where the story could possibly go next, with Joe having quit his job in disgust at the government. Perhaps Box wondered the same thing: at any rate, the Wyoming game warden has his old job back and is once again on special assignment for Governor Rulon. A mysterious, moneyed landowner is buying up the northeast corner of the state, possibly engaged in murder for hire—and Nate Romanowski, Joe's enigmatic best friend, just might be involved. After the supercharged fury of the last book, this marks a welcome return to the thing Box does best: putting family man Joe in a dicey situation where, despite his orders to merely observe, his own moral code means he can't help but light the fuse and see where it leads. Being in unfamiliar territory is familiar territory for Pickett, and corrupt-town scenarios are as old as the hills, but Box uses the ploys for maximum suspense, and readers won't mind one bit. It's good to see Pickett writing tickets again.HIGH-DEMAND BACKSTORY: Box is a brand name, and readers would find his books even if they weren't heralded by a national tour and promotional blitz—which, of course, this one is. Copyright 2014 Booklist Reviews.

Joe Pickett investigates a mysterious Black Hills rancher, whose two companions include a "stone cold" killer and, even worse, a bad-news guy from Pickett's past. From the multi-award-winning Box, who's given us 14 Joe Pickett novels and four stand-alones.

In this 14th outing (after Breaking Point), Joe Pickett is back at his job as game warden with a pay increase, retention of his seniority, and the title of "special liaison to the executive branch." Joe is once again working on a special assignment for Wyoming governor Rulon, who has an unhappy relationship with the federal government. To keep the Feds from running roughshod over his state and its citizens, Rulon sends Joe to Medicine Wheel County to investigate quietly a mysterious man named Wolfgang Templeton who might be operating an elite murder-for-hire operation. What Joe uncovers is a tangled puzzle of philanthropy, murder, and corrupt county and state officials, mixed together with the reappearance of his old friend Nate Romanowski and Joe's mother-in-law, Missy Vankueran. Never one to hesitate, Joe jumps right into the fray. At the same time Joe's mind is also with daughter Sheridan's challenges at the university and foster daughter April's obsession with a rodeo star. VERDICT With each book, Box just gets better. Nonstop action, a twisty plot, and great characters make his latest a must-read for fans of this series. [See Prepub Alert, 9/16/13.]—Patricia Ann Owens, formerly with Illinois Eastern Community Colls., Mt. Carmel

Near the start of bestseller Box's exhilarating 14th Joe Pickett novel (after 2013's Breaking Point), the Wyoming game warden receives a summons to the governor's office. Governor Rulon needs Joe to travel to Medicine Wheel County to investigate Wolfgang Templeton, a retired businessman who may be involved in a "high-end murder-for-hire business." Joe's assignment is to gather information on Templeton while assisting the area's game warden, without letting any of the locals know his true purpose or letting "things get western." Meanwhile, Joe's ward, April, is being courted by Dallas Cates, rodeo champion and possible rapist, and his eldest daughter, Sheridan, is getting "a really bad vibe" from a transfer student in her dorm at the University of Wyoming. Unlike your standard-issue action hero, the canny Joe uses his wits, taking time to assess the literal and figurative lay of the land. Box does a good job of working in the backstories of characters and situations, so even new readers should have no problem following along. Agent: Ann Rittenberg, Ann Rittenberg Literary Agency. (Mar.)