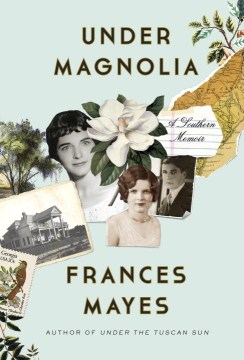 Mayes, adored for her famed Tuscany books (Under the Tuscan Sun, 1996; Every Day in Tuscany, 2010), mined the murky depths of her family's history for her first novel, Swan (2002). She now returns to the scene of the crimes in both literal and figurative senses. Her "southern memoir" is a tale straight out of Faulkner, rife with episodes of dissipation and disillusion, parents who loved and fought with equally wild abandon, and ancestors with names like Big Mama and Daddy Jack. While on a book tour in Oxford, Mississippi, Mayes realized her southern roots ran deeper than she believed or would have liked. But she and her husband were sufficiently compelled to relocate from Northern California to North Carolina, settling in a university town with a far enough remove to allow her an objective distance from which to analyze the signature episodes of her childhood. With her trademark skill for capturing the essence of place and time, Mayes candidly reveals a youth riddled with psychological abuse and parental neglect that, nevertheless, ignited a fiery passion for adventure and self-discovery. HIGH-DEMAND BACKSTORY: A best-selling sensation worldwide, Mayes will galvanize readers with this vigorously promoted coming-of-age tale set on her home terrain. Copyright 2014 Booklist Reviews.

Set in the author's "one-mile-square" hometown of Fitzgerald in the backwoods of Georgia, Mayes's (Every Day in Tuscany) latest memoir depicts a childhood of rich meals and drunk, impatient parents—her adoring and violent father and her restless alcoholic mother. Mayes endures their "long night sieges," distracting herself with books and seeking comfort from Willie Bell, the family cook. The portrayal of Willie Bell is refreshingly unromantic, written with candor and respect as Mayes refers to her as an ally, adding "it was not a cozy, member-of-the-family thing she and I simply knew we were in it together." When Mayes refers to fleeing the South, her reasoning is more tied to ambition than victimhood. Her accounts of high school and college—first at Randolph-Macon, then at University of Florida—are teeming with tales of friendships and eager suitors. Though the prose is dazzling throughout, Mayes's best stories are the early ones. In an especially moving scene, she sits outside in a car while her father dies in the house. Her uncle urges her to come inside, saying "Sugar, you better go in and say good-bye." Readers will not tire of Mayes' splendid imagery. Agent: Peter Ginsberg, Curtis Brown. (Apr.)   The White House: It's Historic Furnishings and First Families Betty C. Monkman Abbeville, $49.95 (320p) ISBN 978-0-7892-1179-8 1600 Pennsylvania Avenue, America's home address, is the subject of this comprehensive and celebratory tome covering more than 200 years of presidential and cultural history told through lavish full-color photography. With an informed eye and a scholarly devotion, Monkman, the White House curator for more than three decades, has assembled an impressive catalog of the art, furniture, china, silver, and other decor of all but one of the First Families that have resided there. (George Washington never slept there.) This second edition updates readers with previously unpublished pictures from the most recent Presidents' tenure including the book's Red Room as it looks today and also the current Oval office where you can see Barack Obama's Resolute desk, the same one used by Presidents Kennedy, Carter, Reagan, Clinton and G.W. Bush. A rare stereographic portrait of a somber White House draped in mourning cloth from Washington upholsterers on the occasion of President Lincoln's death in April, 1865 is also in the new edition. Along with comprehensive coverage of the public rooms, there's an occasional peak at the private corners. Photos of the Lincoln bedroom, for example, provides a close-up of the elaborate rosewood headboard and gilded canopy of the Lincoln bed. Though Lincoln never slept there, he used the room as an upstairs office; Mrs. Lincoln bought the bed in 1861 for the presidential guest room. Lovers of history or the decorative arts, in particular, will find this book abundantly satisfying, but anyone with a national pride will appreciate and admire their "Family" heirlooms. (Apr.)

All over but the shoutin'Bragg, Rick

Not for nothing: glimpses into a Jersey girlhoodCurto, Kathy

Between them: remembering my parentsFord, Richard, 1944-

The distance between usGrande, Reyna

The lost landscape: a writer's coming of ageOates, Joyce Carol, 1938-