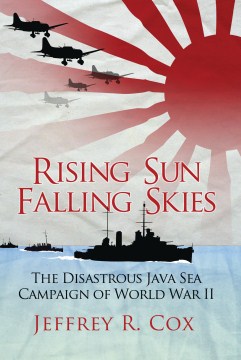 Cox, a freelance military historian, focuses on the first three months of World War II in the Southeast Pacific, which culminated in the February 1942 Battle of the Java Sea, in which the Allied Dutch, British, American, and Australian naval forces fell to the Japanese. Cox integrates his strategic and tactical analyses with the narratives of those involved in the Pacific Theater. He is very critical of Gen. Douglas MacArthur and Dutch Admiral Conrad Helfrich, whose personal failures so damaged Allied work in the Southeast Pacific. Cox points out that these united armies fought with different strategic goals, dramatically weakening the overall effort. With no experience in joint operations, they even fumbled basic cooperative moves, with fundamental deficiencies in communications, logistics, and air power. These, along with unfortunate accidents, severely handicapped the endeavor. The author expressly honors the bravery of those who were wounded or died in this failed attempt to defend Singapore, the Dutch East Indies, the Philippines, and Australia. Cox, who is also an attorney, ably documents his pointed conclusions, citing U.S., British, Dutch, and Japanese sources. VERDICT This book will appeal to all readers interested in military affairs, especially in relation to World War II.—Mark Jones, Mercantile Lib., Cincinnati