The detective & the pipe girl : a mystery / Michael Craven. 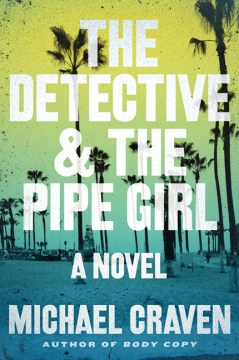 This 300-plus page novel could slim down to about 150 pages if former ad writer Craven didn't have the habit of repeating himself (the first-person narrator often asks and answers questions, as in "You know that feeling? You know that feeling") and of giving his hero all the space of the Old West to opine on just about any topic. This makes the reader feel as if he's enduring coffee with a gabby old relative rather than following a detective on the hunt. But the excessive rambling doesn't totally mar this old-fashioned noir thriller. Craven's hero is an L.A. private eye, John Darvelle, who is summoned by Arthur Vonz, a big-time studio mogul, to find an old girlfriend. Vonz called off the affair but can't shake his love for this Suzanne Neal, who may be involved with a movie star, or with many other men. Darvelle locates the woman, but everything is upended by her murder soon after. The mystery of Suzanne Neal expands into the Hollywood studio system and a clandestine crime operation. Too much mouthiness but satisfying complications and action. Copyright 2014 Booklist Reviews.

Famous film director Arthur Vonz hires PI John Darvelle to find his former lover, Suzanne Neal, who has dropped out of sight. Vonz tells Darvelle he wants to make sure she's okay. Something's off with the story, but Darvelle takes the case; almost too easily, he finds Suzanne. But tragically, she dies the next night and Darvelle must now ascertain who wanted her dead and more important, why. Soon, he has uncovered a sordid little sex industry that looks to be particularly lethal for beautiful young females. The operators behind this syndicate don't appreciate the PI's attention and things heat up exponentially. VERDICT One can never soak up too much Los Angeles-doused atmosphere, especially when the narrator's tone is cynical and slightly bored. Craven's (Body Copy) plot-driven story zips by—addictively, I might add—but his repeated use of rhetorical questions grates. While the author's stereotypes (cops, actors, old mob mentor) won't break new ground, he does a fine job of describing the City of Angels. Try with Sue Grafton readers.

Near the start of Craven's suspenseful, well-plotted neo-noir set in L.A., Arthur Vonz, "one of the top film directors in the world," hires PI John Darvelle to track down his former mistress, Suzanne Neal—a beautiful actress whom he met on a movie set (she was working as an extra at the time). Vonz, who hasn't heard from Suzanne in a while, wants Darvelle to deliver a letter to her, but knows only that she lives in Santa Monica. In the course of looking for Suzanne, Darvelle uncovers a sophisticated prostitution operation that involves the "pipe girls" of the title: hookers for wealthy, prominent people who can neither afford nor tolerate indiscretion. The trail leads Darvelle to a high-powered actor, a former mobster, a deadly-serious pimp, and a clever insight into the meaning of a tattoo. Craven (Body Copy) knows contemporary L.A. well, and writes about it with conviction. Readers will want to see more of Darvelle—a quirky, thoughtful detective with a wry sense of humor and a philosophical bent. Though serious about his work, he doesn't take himself too seriously. Agent: Erica Spellman-Silverman, Trident Media Group. (June)