Any other name / Craig Johnson. 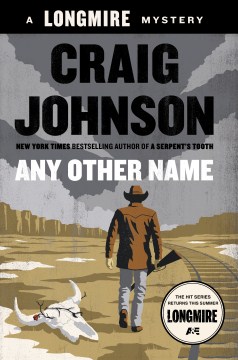 Wyoming sheriff Walt Longmire's eleventh case takes him out of his jurisdiction to Campbell County, near South Dakota. He's investigating a lawman's suicide as a favor to his friend, the crusty Lucian Connally, who's along for the ride. Walt may be away from home, but when undersheriff and love interest Victoria Moretti and old friend Henry Standing Bear show up, he may as well have brought Absaroka County with him. Many of the elements here will seem familiar from previous novels, from the change of location (The Dark Horse), to the key role played by a vintage sidearm (The Cold Dish), to the touch of supernatural and visit from Walt's spirit guide (Hell Is Empty), to the set piece in a snowstorm (take your pick). But while Johnson might be coasting just a little, all that means is that new readers referred by the popular TV show Longmire (the books have been appropriately rebranded) might be better served by starting at the beginning. Those who have followed the series all along will find no reason to stop now. Copyright 2014 Booklist Reviews.

Wyoming sheriff Walt Longmire and Lucian Connally, his former boss, travel to a neighboring county to look into the suicide of Det. Gerald Holman. The detective was a longtime friend of Connally, and his death raised many questions; Walt is the best person to find the solutions. Time becomes an issue for Walt, not only in tracing the clues of Holman's last case involving missing women, but also in trying to get to Philadelphia in time for the birth of his first grandchild. In this 11th series installment (after Spirit of Steamboat), Longmire displays his usual down-to-earth charm and dogged determination asking questions of the local sheriff, his sister who owns the local strip club, a lonely clerk whose post office is facing eminent closure, and Holman's wife and daughter, who seem to know more than they are telling. Walt grasps the connection between the vanished women and Holman's death, and not even a herd of bison in Custer State Park can stop him. VERDICT Another well-crafted story from Johnson, filled with endearing characters and nonstop action that will appeal to series fans and readers of other Western mystery authors such as C. J. Box. [See Prepub Alert, 1/6/14; 15-city author tour.]—Patricia Ann Owens, formerly with Illinois Eastern Community Colls., Mt. Carmel

A not-quite-cold case preoccupies Walt Longmire in bestseller Johnson's top-notch 11th mystery featuring the Wyoming sheriff (after 2013's novella Spirit of Steamboat). Walt reluctantly agrees to help his old boss and mentor, Lucian Connally, investigate the suicide of police detective Gerald Holman in neighboring Campbell County, even though Walt's official powers stop at the Absaroka County line. Holman apparently shot himself because he had seen too much darkness in his job, but the last cases on Holman's desk, involving three very different missing women, get Walt thinking. While it looks as if the women just up and left their lives, Walt's suspicion that the disappearances are connected proves correct. To his peril, he discovers that some people are prepared to go to any lengths to keep the big picture hidden. Meanwhile, Walt awaits the birth of his first grandchild in Philadelphia. Johnson's hero only gets better—both at solving cases and at hooking readers—with age. 15-city author tour. Agent: Gail Hochman, Brandt & Hochman Literary Agents. (May)

Eleven days: a novel of the heartlandHarstad, Donald

Nothing but trouble: a Kevin Kerney novelMcGarrity, Michael