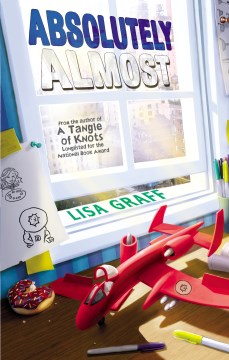 *Starred Review* Albie almost understands why he is starting fifth grade at a new school. It's got something to do with the things he can't quite do, like subtract numbers inside his head or figure out the words in books. Fortunately, Albie also gets a kindhearted new sitter named Calista, who can turn Albie's sadness into happiness simply through the magic of donuts. But even Calista can't stop the mean kid at school from calling Albie names, or make Albie's parents see how hard he tries in school. As every kid knows, some problems take more than donuts to solve. Graff (A Tangle of Knots, 2013) creates a heartfelt portrait of a child searching for nothing more than a safe place to thrive. The story is parsed into short chapters that can stand alone as mini-stories, perfect for young readers who aren't ready to tackle full pages of text. This format is also well suited to presenting the incremental steps of Albie's evolution from bewildered victim to hero of his own story. Beautifully written, Albie's story is accessible and dignified, with a gentle message that will touch any reader's heart. Middle-grade readers will love the references to Dav Pilkey's inexhaustibly popular Captain Underpants series, which has introduced so many children to the fun side of reading. A perfect book to share with struggling readers. Copyright 2014 Booklist Reviews.

Ten-year-old New Yorker Albie is a middle-of-the-road (at best) student. He's buoyed by small successes in math club and on spelling tests, and by his new babysitter's low-key approach to confidence-boosting. Albie is a sweet, vulnerable kid who just needs a little extra help and to whom readers may well relate. Short chapters add to the story's accessibility and keep the pace moving.

Ten-year-old New Yorker Albie is starting at P.S. 183, having been kicked out of his fancy prep school because of low grades. Albie tries hard, but he's a middle-of-the-road (at best) student, an "almost," as he calls it. At his new school, he starts a tentative friendship with fellow outcast Betsy, who has a stutter, and he's buoyed by small successes in math club and on spelling tests. Most importantly, though, his new babysitter, Calista, is a sympathetic adult. Her low-key approach to confidence-boosting includes teaching him to draw superheroes and taking him to the zoo for a "sad day" after a particularly challenging day of school -- which, unfortunately, leads to her dismissal. Like Kevin Henkes's Billy Miller (The Year of Billy Miller, rev. 9/13), Albie is a sweet, vulnerable kid who just needs a little extra help and to whom readers may well relate. Short chapters -- some just one page -- add to the story's accessibility and keep the pace moving. The characters are well rounded, and, gratifyingly, even Albie's seemingly single-minded, results-driven parents come through for him in the end. elissa gershowit Copyright 2014 Horn Book Magazine.

Half-Korean 10-year-old Albie is being forced to switch from his private New York City school to P.S. 183. His new school gives him more specialized attention, but it also means dodging a name-calling bully and making friends other than his buddy Erlan, whose family is starring in a reality TV show. Because of Albie's academic struggles (especially in spelling and math), his mother hires Calista, a college art student, to tutor and spend time with him. Albie isn't happy about these and other developments, and his matter-of-fact observations are often both humorous and poignant: "I didn't think the book was for babies at all, because for one thing babies can't read," he thinks after his mother tells him he's "way too old" for Captain Underpants and hands him a copy of Johnny Tremain. Graff's (A Tangle of Knots) gentle story invokes evergreen themes of coming to appreciate one's strengths (and weaknesses), and stands out for its thoughtful, moving portrait of a boy who learns to keep moving forward, taking on the world at his own speed. Ages 8–12. Agent: Stephen Barbara, Foundry Literary + Media. (June)

Fish in a treeHunt, Lynda Mullaly