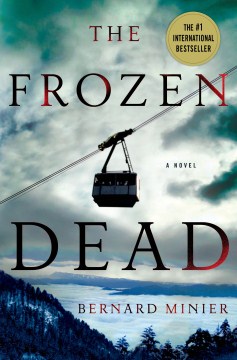 *Starred Review* Commandant Servaz, a top-notch investigator for the city of Toulouse, France, at the foot of the Pyrenees, relies more on his gut than on science. Servaz is annoyed when he is called away from an investigation to a new crime scene at the hydroelectric plant of Arruns, so high above sea level that the only way to reach it is by cable car. A beheaded body is hung on the upper deck; it is not a human body, however, but rather that of a Thoroughbred horse. This disturbing scene only gets more disturbing when the DNA of an inmate at Institute Wargnier, the nearby psychiatric prison, is found on the horse. This case gets priority as the horse belonged to Eric Lombard, CEO of a multinational company and member of a very influential family with strong political ties to the area. In a parallel story, Diane Berg, a new psychologist, has arrived at the institute and is not entirely welcome, especially after she uncovers flagrant mistreatment of the prisoners. The pervasiveness of evil in this tense and disturbing novel makes for very compelling reading, with the suspense bordering on horror. It should appeal to those who enjoyed Pierre Lemaitre's Alex (2013) as well as the edgier Scandinavian thrillers. Copyright 2014 Booklist Reviews.

Set in the French Pyrenees, Minier's debut thriller introduces Commandant Martin Servaz of the Toulouse police, who has been called to the scene of an unusual and brutal crime. The prized yearling of a local wealthy businessman has been decapitated, and its headless corpse is found hanging from cables suspended near the cable car terminus on a mountain peak. Servaz reluctantly begins his investigation and finds, shortly thereafter, the DNA of a notorious murderer on the horse's body. This lead is baffling as this killer is currently incarcerated in a nearby asylum for the criminally insane. A few days later, a chemist in a neighboring town is found horribly murdered with the same improbable DNA found on the scene. Servaz and his team rush to piece together the dark and twisted story of wealth, sex, and revenge in order to head off a ruthless murderer. VERDICT Complex, fast-paced, and completely absorbing, Minier's wickedly plotted mystery has already been published in numerous languages and found a place on international best sellers lists. Thriller and crime fiction fans will have a hard time putting this mix of police procedural and psychological thriller down.—Madeline Solien, Deerfield P.L., IL

French author Minier's assured debut adroitly combines a genuinely creepy series of crimes, a literally chilling atmosphere, and a dogged detective. Commandant Martin Servaz, of the regional crime unit in Toulouse, is annoyed to be pulled off the sadistic murder of a homeless man for a case that doesn't even involve homicide. The mutilated and beheaded corpse of a horse was left suspended at a cable car terminus, terrifying the workers at a water power plant that the tram services. The horse belonged to ultrawealthy Eric Lombard, who owns the plant and has companies all around the world, as well as friends in high places. A nearby psychiatric institution specializes in the treatment of extremely dangerous murderers, including a Hannibal Lecter–like sociopath, but the asylum's security measures make it impossible for any of the patients to escape. Minier's execution equals his considerable cleverness. (Aug.)

The murder of Harriet KrohnFossum, Karin, 1954-