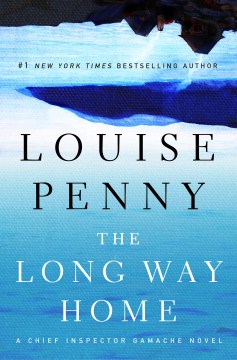 *Starred Review* Until now, Penny's challenge in her best-selling Armand Gamache series was to imagine new ways to take the chief inspector of the Sûreté du Québec from his Montreal home to the vividly evoked village of Three Pines, the author's setting of choice. Now, with Gamache retired to Three Pines, there is a new challenge: coming up with reasons to get her hero out of town. No challenge is too great for Penny, as skillful a plotter as she is a marvelous creator of landscape and character. Still grieving over the carnage that wreaked havoc with those he loves and with Three Pines itself (How the Light Gets In, 2013), Gamache reluctantly agrees to come to the aid of his friend, artist Clara Morrow, who is worried about her husband, fellow artist Peter, who has failed to return to Three Pines after their agreed-upon one-year separation. Gamache and his former assistant, Jean-Guy Beauvoir, follow Peter's trail to Europe and back to Toronto, where he visited his former art teacher, and on to the remote mouth of the St. Lawrence River. In search of artistic inspiration, Peter may have found something very different and much more lethal. As always, Penny dexterously combines suspense with psychological drama, overlaying the whole with an all-powerful sense of landscape as a conduit to meaning. The wilds of the upper St. Lawrence, once called "the land God gave to Cain," combine echoes of mysticism with portents of evil, permeating the air with the same violent forces that roil within the characters. Another gem from the endlessly astonishing Penny. HIGH-DEMAND BACKSTORY: Penny appears to have reserved a lifetime seat atop best-seller lists everywhere, and, with the appearance of her latest, she will take her place once again. Copyright 2014 Booklist Reviews.

Penny's tenth book in her award-winning "Inspector Gamache" series (after How the Light Gets In) is another excellent character-driven mystery set in the village of Three Pines. After the explosive events in the previous book, Gamache and his wife have retired to Three Pines for peace and recuperation. But Gamache feels obligated to leave his refuge as one of his best friends, Clara Morrow, requires his expertise when her husband Peter goes missing. After Clara became a more famous artist than her spouse, Peter left to find himself, promising to be back in a year. But he has not returned. Retracing Peter's journey, Gamache, hoping to find his friend, instead encounters murder and madness. VERDICT As with all the author's other titles, Penny wraps her mystery around the history and personality of the people involved. By this point in the series, each inhabitant of Three Pines is a distinct individual, and the humor that lights the dark places of the investigation is firmly rooted in their long friendships, or, in some cases, frenemyships. The heartbreaking conclusion will leave series readers blinking back tears. Highly recommended.—Marlene Harris, Seattle P.L.

In Edgar-finalist Penny's perceptive, perfectly paced 10th mystery featuring Chief Insp. Armand Gamache of the Quebec Sûreté (after 2013's How the Light Gets In), Three Pines resident Peter Morrow has pledged to show up for a dinner with his wife, Clara, exactly one year after their separation. When Peter fails to materialize on the appointed day, Clara fears that he has either found a new woman—or died. Clara turns to Gamache for help in locating Peter, who appears to have adopted a new approach to painting during his time away from her. Over the course of the intriguing search, Penny offers real insight into the evolution of artistic style as well as the envy that artists feel about each other's success. At times, the prose is remarkably fresh, filled with illuminating and delightful turns of phrase (e.g., Clara notices "her own ego, showing some ankle"), though readers should also be prepared for the breathless sentence fragments that litter virtually every chapter. Agent: Teresa Chris, Teresa Chris Literary Agency. (Aug.)

In the bleak midwinterSpencer-Fleming, Julia

In the shadow of the glacierDelany, Vicki, 1951-