Global muckraking : 100 years of investigative journalism from around the world / edited by Anya Schiffrin. 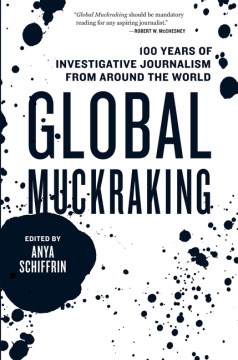 At the risk of giving readers the impression that atrocities and injustices are eternal and constant, journalists have provoked lasting change and altogether made a strong argument for continued vigilance. Noted journalist Schiffrin presents groundbreaking articles that led to major reforms in labor practices and to government changes in Asia, Africa, Latin America, Europe, and the Middle East. The coverage ranges from government corruption to corporate exploitation to human rights issues, including horrendous abuse on Congolese rubber plantations, environmental atrocities in the Niger Delta, famine in the Ukraine under Stalin, Pinochet's death squads in Chile, the Nestle infant formula scandal, and Nike sweatshops. Beyond the historical examination of injustices, the collection looks at changes in international investigative journalism and advocacy tactics in the last 100 years as pamphlets have evolved into blogs, and advocacy groups understand the need to attract the attention of international media and the public. Many journalists featured in this collection went on to write groundbreaking books. Copyright 2014 Booklist Reviews.

Although muckraking has its roots in early 20th-century America, this form of investigative journalism has been important in bringing to light stories about political corruption, human rights abuses, and poor labor conditions worldwide. Editor Schiffrin (director, media & communications program, Columbia Univ.; From Cairo to Wall Street: Voices from the Global Spring) has gathered examples of this type of exposure reporting, which she obtained from the original print sources she found in libraries around the world. The volume was compiled in order to highlight the importance of investigative journalism during a time when staffing and budget cuts make it harder for newspapers to carry out their watchdog function. VERDICT While this is an intriguing introduction to global investigative journalism, the book would have been a better resource had it included the full text of each piece instead of excerpts, especially since readers cannot access many of the articles. A more in-depth analysis from the historians and journalists Schiffrin invited to introduce each piece would have also enriched the book. Nevertheless, it should be of interest to aspiring journalists, media historians, and those interested in international affairs.—Donna Marie Smith, Palm Beach Cty. Lib. Syst., FL

Muckrakers and their published work provide the much needed spark for addressing political corruption, fraud, and bad business practices in America and throughout the world, according to a new book by Schiffrin, the director of the media and communication program at Columbia University's School of International and Public Affairs. As digital information rapidly replaces print media, Schiffrin (who also happens to be the daughter of the late André Schiffrin, the New Press founder) revisits some of the published pieces that have sent shock waves through readers, including a telling 1896 exposé of the indentured "coolie" system in the English colonies; a gripping 1904 British story on atrocities in the Congo; a bitter 1924 chronicle of the penal colony Devil's Island, ; an inflammatory 1986 article on the devastating aftermath of a Chinese earthquake in Tangshan; and a shocking 2013 yarn of a corporation ignoring the men battling chronic kidney disease from working in the sugar cane industry. There are 47 articles by leading journalists, past and present, divided into sections like labor abuses, corruption, anti-colonialism, the environment and natural disasters, famine, military and police, rural life, and women. Looking back, Schiffrin's impressive survey of the crusading media is essential for those concerned with the business of news and its bold history of courageous messengers. (Aug.)

The shock doctrine: the rise of disaster capitalismKlein, Naomi, 1970-

Russian roulette: the inside story of how Vladimir Putin attacked a U.S. election and shaped the Trump presidencyIsikoff, Michael

Fleeced: how Washington insiders, foreign lobbyists, sub-prime lenders, credit card companies, Iraq reconstruction contractors, and Clinton cronies are picking our pockets-- and what to do about itMorris, Dick

The unwinding: an inner history of the new AmericaPacker, George, 1960-

Capital in the twenty-first centuryPiketty, Thomas, 1971-