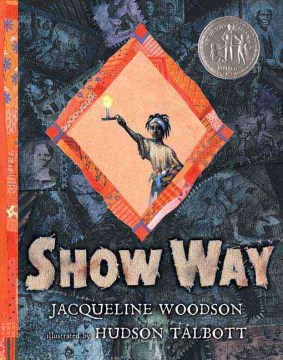 /*Starred Review*/ Gr. 3-5. A Show Way is a quilt with secret meanings, and the image works as both history and haunting metaphor in this exquisite picture book. Based on Woodson's own history, the unforgettable story tells of African American women across generations, from slavery and the civil rights movement to the present. The cut-out jacket design is impressive, as is Talbott's mixed-media artwork inside, which extends Woodson's clear poetic narrative with beautiful collages that make use of big triangles, squares, and curves to emphasize portraits and landscapes and show connections and courage. The first double-page spread is of anguished separation when Soonie's great-grandmother is sold "without her ma or pa." Growing up on a plantation in South Carolina, Soonie learns from Big Mama about children "growing up and getting themselves free," and also how to sew quilts with signs that show the way to freedom. Time passes: Soonie's granddaughter, Georgiana, has twin girls who march for freedom in the 1960s. The final glorious spread shows Georgiana's granddaughter, Jacqueline Woodson, laughing at home with her own beloved daughter, Toshi Georgiana, whose picture is embedded in a quilt, connecting her with those who came before. A must for the classroom, this story will move many readers to explore their own family roots; link it to the Booklist interview with Woodson [BKL F 1 05], in which she talks about what she owes to those who came before her. ((Reviewed September 15, 2005)) Copyright 2005 Booklist Reviews.

With a refrain of mother love, Woodson traces eight generations in her family, from "Soonie's great-grandma," sold at seven, to Woodson's own little daughter. The earliest in this female line have skills and creativity that will serve their descendants well. Talbott uses the patchwork motif to good effect. Hope, courage, and perseverance light this handsome book. Copyright 2006 Horn Book Guide Reviews.

Woodson traces eight generations in her family, from "Soonie's great-grandma," sold at seven, to Woodson's own little daughter, Soonie's great-great-granddaughter. The earliest in this female line, born into slavery, have skills and creativity that will serve their descendants well. Leaving her native Virginia, that first child takes with her needles, thread, and a bit of muslin; her daughter Mathis May is already an accomplished seamstress when she, too, is sold from her family at seven. The patterns of her "Show Way" quilts point north to freedom; later generations, born free, earn economic emancipation by selling quilts now valued for their beauty as well as the stories they tell. Soonie, Woodson's great-grandmother, worked the fields; but her descendants are readers and teachers, and later artists and writers who commemorate the past. Although its structure is somewhat unwieldy, Woodson stitches her story together with a refrain of mother love: "Loved that baby up so. Yes, she loved that baby up." Talbott uses the patchwork motif to good effect with vignettes from the several lives plus numerous topical spreads: Blue and Gray states literally ripped apart by a fiery glimpse of the Civil War; a collage of 1960s turmoil. A handsome die-cut cover reveals Mathis May lighting the way; it opens to her Show Way quilt, a potent symbol of the hope, courage, and perseverance that light this handsome book. Copyright 2005 Horn Book Magazine Reviews.

This affecting, poetic paper-over-board picture book stands out from the first glance. On the innovative cover, a montage of black-and-white pictures of African-American captives, arranged to resemble a quilt, act as a background to a diamond-shaped die-cut opening that frames the image of an African-American girl holding a lighted candle. Woodson's (Coming on Home Soon) story, both historical and deeply personal, begins as a seven-year-old girl is sold into slavery and taken to a South Carolina plantation "without her ma or pa but with some muslin her ma had given her." There she learns to "sew colored thread into stars and moons and roads that slave children grew up and followed late in the night, a piece of quilt and the true moon leading them." Later, her daughter also stitches quilts that become "a Show Way" to guide captives escaping to freedom. The quilt becomes a metaphor not only for physical freedom but for freedom of expression. Long after emancipation, subsequent generations of women in this family stay connected through quilting, using needle and thread as a means of support and as a creative outlet. Woodson eventually reveals that this is her own lineage, and "[her] words became books that told the stories of many people's Show Ways." Talbott uses the quilt motif in rousing ways, piecing together quotes or news items for a pair of spreads about one generation "walking in a line to change the laws" as well as in softly quilted patterns that tie together the love of a child, a theme throughout this elegantly designed volume. Ages 5-up. (Sept.) Copyright 2005 Reed Business Information.

All the way to America: the story of a big Italian family and a little shovelYaccarino, Dan

The road to ParisGrimes, Nikki

Most loved in all the worldHegamin, Tonya

Circle unbroken: the story of the sweetgrass basketRaven, Margot Theis