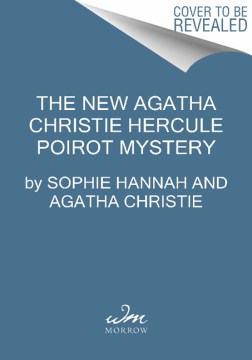 *Starred Review* The return of Hercule Poirot after a 40-year absence is certain to please the legions of Agatha Christie fans, young and old, forced to content themselves with rereading the master. Working with the authorization of the Christie estate, Hannah, known for her psychological thrillers, proves more than capable at re-creating the legendary Belgian detective, who once again puts his "little grey cells" to good use, this time in unraveling an exquisitely tangled triple murder. Attempting to take some time away from his regular detective work, Poirot is staying in a London residential hotel. One night, dining solo at a nearby café, he encounters a distraught woman who claims to be "beyond help." The woman quickly disappears, but Poirot becomes convinced, for reasons we only learn much later, that she is somehow connected to three murders in an upscale hotel, crimes that have the Belgian's hotel mate, Scotland Yard Inspector Catchpool, completely baffled. Poirot elbows himself into the action, mercilessly ordering Catchpool about while he interviews hotel staff and gets his deductive juices flowing. Hannah sticks to the Christie formula, embellishing now and again, and making the most of the hapless but quite sympathetic Catchpool as the largely clueless narrator. Not that there aren't a plethora of clues on offer. Hannah lards this retro dish with a surfeit of red herrings and, of course, plenty of suspects, all of which will satisfy fans of Golden Age whodunits. Poirot is at his lordly, flamboyant best during the Great Reveal, staged at the hotel, which is likely to leave even the most determined clue-sniffers reeling. Christie devotees will be devoutly hoping that Hannah plans on a few more twirls of Poirot's mustache. HIGH-DEMAND BACKSTORY: Morrow is pulling out all the stops to ensure that Poirot's return is trumpeted wherever cozy fans take their tea. Copyright 2014 Booklist Reviews.

Because only Shakespeare and the Bible outsell Agatha Christie, internationally best-selling author Hannah must have been thrilled when the Christie estate authorized her writing a new Christie mystery—the first time it has ever done so. Hannah here resurrects beloved Belgian detective Hercule Poirot, though plot details have not been officially released. Note that Morrow is reissuing Christie's After the Funeral with a new foreword by Hannah explaining why it's her favorite Poirot mystery; look for distribution on World Book Night, April 23.

Hercule Poirot requires a rest for his "little grey cells" and anonymously rents a comfortable room not too far from his well-known address. The Belgian detective settles into his vacance with a new Thursday night routine—a light meal and two cups of Pleasant's Coffee House superb namesake. On one such evening, Poirot's rituals are disturbed by a terrified young woman entering the café as if all of hell is behind her. Thus begins a search for a macabre triple murderer who lines up the dead and places monogrammed cuff links between their lips. Edward Catchpool, Poirot's fellow boarder as well as a Scotland Yard policeman, begrudgingly allows the detective to lead the case. VERDICT Almost 40 years after Agatha Christie's final Hercule Poirot mystery, Hannah (The Orphan Choir), with the authorization of the Christie estate, has re-created the sleuth's voice and character as true to the original as anyone could. The egotistical little Belgian, interested in his "order and methods" and employing the "little grey cells" is back. Edward Catchpool is no replacement for the well-intended and captivating Capt. Arthur Hastings, yet fans of all formats of Agatha Christie and Poirot (the BBC TV series as well as original books, plays, etc) will delight in this new foray into the Christie canon. [See Prepub Alert, 3/3/14; see also Hannah's essay on p. 78.]—Jennifer Funk, McKendree Univ. Lib., Lebanon, IL

Hannah (The Orphan Choir) does a superb job of channeling Agatha Christie in this wholly successful pastiche authorized by the Christie estate. One evening in February 1929, Hercule Poirot is dining alone at a London coffee shop when a woman arrives who looks as if she had "come face to face with the devil." Poirot joins the distraught woman, known at first as Jennie, who tells the sleuth that no one can help her because she's "already dead," and that no one should search for her killer. "The crime must never be solved," she proclaims. Another cryptic remark Jennie makes before fleeing into the night—"please let no one open their mouths"—resonates with Poirot and Insp. Edward Catchpool, the Scotland Yard detective with whom he rooms, after two women and a man are found poisoned in a hotel near Piccadilly Circus, each with a monogrammed gold cuff link inserted in his or her mouth. The rest of the novel lives up to the promise of the opening, complete with dazzling deductions, subtle cluing, false endings, and superb prose. After the first chapter, Catchpool, who brings his own psychological baggage to the case, serves splendidly as the book's narrator. Lovers of classic whodunits can only hope Hannah continues to offer her take on the great Belgian detective. (Sept.)