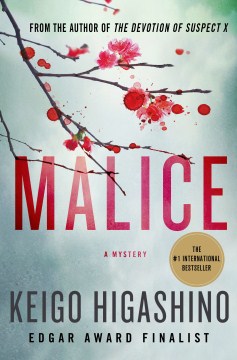 Renowned novelist Kunihiko Hidaka is found murdered in his locked study, in his locked home. He is discovered by his wife, Rie, and his closest friend, Osamu Nonoguchi. When Tokyo Police Detective Kyochiro Kaga begins to investigate, he is surprised to see Nonoguchi; they had once been colleagues on the faculty of a middle school. Evidence leads Kaga to charge Nonoguchi with murder, and Nonoguchi freely admits to it. But Kaga's superiors won't bring the case to trial without knowing why Nonoguchi murdered his friend, and the accused refuses to explain. Kaga must deduce the motive as well as the killer's identity. Higashino tells his intricate story through Kaga's notes and Nonoguchi's written responses (he, too, is a writer). As in Salvation of a Saint (2012), Higashino focuses almost solely on evidence. At the outset, his approach seems unsettling, but the Edgar nominee knows his business; Malice soon becomes awfully hard to put down. Copyright 2014 Booklist Reviews.

In this new offering from the best-selling author of The Devotion of Suspect X and Salvation of a Saint, Det. Kyochiro Kaga steps to center stage to solve a strange and baffling case. When an acclaimed novelist is viciously murdered in his home the night before he moves to Vancouver with his wife, Kaga is brought in to investigate. Arriving at the crime scene, he recognizes the writer's best friend, Osamu Nonoguchi, who discovered the body. Kaga had known Nonoguchi when they worked as teachers in the same public school. As the detective unravels the relationship between an acclaimed author and his old school friend, it is clear that the link between the two men is based on shifting stories, different motives, and threads of interconnection that travel back into the past. VERDICT This smart and original mystery is a true page-turner that carries the reader through theories and relationships that will baffle, surprise, and draw out suspicion until the final few pages. With each book, Higashino continues to elevate the modern mystery as an intense and inventive literary form. [Library marketing.]—Ron Samul, New London, CT

Set in 1996, Higashino's first Kyoichiro Kaga novel to be translated into English is as fiendishly clever as The Devotion of Suspect X (2011), the first in his Detective Galileo series. Kaga finds that he has a personal connection to a murder case. Popular novelist Kunihiko Hidaka was strangled in his home, in some unspecified part of Japan, not long after a visit from his old friend Osamu Nonoguchi, who was also Kaga's colleague when the detective was a teacher. Nonoguchi, one of two potential suspects, has no obvious motive for committing the crime, unlike the other suspect, Miyako Fujio. A few years earlier, Hidaka wrote a successful novel featuring a nasty lead character, a thinly disguised version of Miyako's brother, Masayo. Higashino offers one twist after another, all of which touch on the theme suggested by the book's title. Readers will marvel at the artful way the plot builds to the solution of Hidaka's murder. (Oct.)