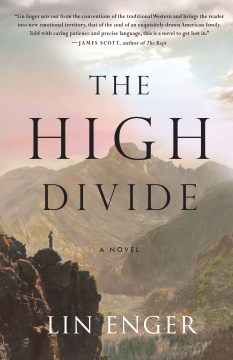 The high plains of the upper Midwest in the late nineteenth century provide the backdrop for this nicely crafted story of family redemption, set amid the disappearance of the buffalo and the prelude to and aftermath of Custer's Indian campaigns. Ulysses Pope leaves his wife and two young sons behind in Minnesota in a search for what we find out later is, in effect, his own soul. The sons, Eli and Danny, and, later, Pope's Danish-born wife, Gretta, search for him in a west that, though rough-edged, is more akin to that of Larry McMurtry than Cormac McCarthy; but the finely wrought prose of Iowa Workshop graduate Enger (novelist Leif's brother) may evoke comparisons to both. This is a gripping story with well-portrayed, complex, and sympathetic main characters and a complement of believable secondary figures in a vividly described region nearing the close of an era. Enger (Undiscovered Country, 2008) is an author worth watching. Copyright 2014 Booklist Reviews.

This new work from Enger (Undiscovered Country) is about a journey—actually, several journeys, all undertaken in 1886 by members of the Pope family. First the father, Ulysses, abandons his family in western Minnesota without explanation for what is revealed to be a stunning moral quest; then sons Eli and little Danny seek him out; and finally wife Gretta heads into the Montana Badlands looking for her sons, her husband, and the truth about her marriage and whether she has been an understanding wife. Along the way, the narrative asks us to consider the consequences of our actions, whether we're willing to answer for them, and whether we would sacrifice even what we love to make things right with the world. At the same time, it affectingly captures the social and environmental degradation of the late 1880s, a time when a reduced native population was being forcibly confined to reservations and the buffalo was being hunted nearly to extinction. VERDICT Moving through the High Divide—"the rough country between the Yellowstone and Missouri rivers"—even as its characters move through important divides, or turning points, of their own, Enger's novel is told in beautifully exact, liquid language that wastes no time, just as one cannot afford to waste time when making a journey such as the Pope family's. Highly recommended. [See Prepub Alert, 3/31/14.]—Barbara Hoffert, Library Journal

In this masterfully told Western reinvention of Homer's Odyssey from Enger (Undiscovered Country), the year is 1886 when Ulysses Pope disappears from the family farm on Minnesota's northern plains, leaving his wife, Gretta, and their sons, Eli and Danny, to fend for themselves. Eli and Danny hop a train west, following a meager trail of clues in search of their missing father. Gretta remains at home a while longer before going to see her sister-in-law in St. Louis in her own quest for answers. Gretta and her sons slowly uncover Ulysses's dark secrets from his time in the Seventh Cavalry under Custer. The brothers head further west, through the Badlands and into the Montana Territory, eventually meeting up with William T. Hornaday, who has mounted an expedition to kill one of the last buffalo and put it on display at the Smithsonian. Eli joins Hornaday's expedition, bringing him closer to a confrontation with his father and to learning about Ulysses's troubled past. Set against a backdrop of beauty and danger, this is the moving story of a man coming to terms with his past. In its narrative simplicity and emotional directness, it is reminiscent of John Ford's classic The Searchers. Agent: P.J. Mark, Janklow & Nesbit. (Sept.)