The killer next door / Alex Marwood. 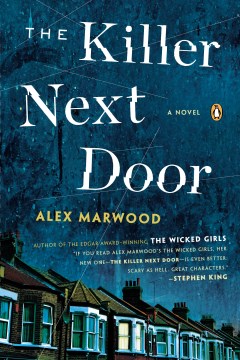 Marwood's second novel (following The Wicked Girls, 2013) opens with police telling Cheryl Farrell that "there were some body parts in the flat that didn't match up with the known victims." Flashback to before the bodies were found, when a woman calling herself Collette is the latest to rent an apartment in a dodgy South London rooming house. Slowly Marwood introduces the other tenants, including one who is perfecting his mummification skills on the women he's killed and keeping around for company. The reader knows the killer is in the building but can't be sure who it is. All the tenants have something to hide, so when an accident seems likely to bring the police to their door, they band together to cover up what happened. But not everyone can drown out the beating of the telltale heart, and things escalate at a gripping pace. Marwood is emerging as a master of contemporary British suspense. Copyright 2014 Booklist Reviews.

Marwood follows up on the success of her Edgar Award-winning debut, The Wicked Girls, with a creepy new mystery. The setting is a South London run-down boarding house presided over by a lecherous and disturbing landlord—the kind of place that caters to residents who prefer to pay in cash and stay off the radar. The six residents of 23 Beulah Grove are a diverse group, including a street-savvy shoplifter, an Iranian refugee, and a woman on the run. Despite their differences, the tenants are united by an accident at the house—and by the growing realization that one of them is a killer. Marwood once again creates a small world of the downtrodden and abused, and populates it with realistic characters. VERDICT If the author's first book explored how poverty and abuse can make monsters of men, then this new novel will have readers peering suspiciously at the neighbors and wondering just what's behind their closed doors. This tightly plotted story grabs readers from the opening paragraphs and will keep them up far too late at night. Highly recommended for fans of Laura Lippman, Tana French, and Gillian Flynn.—Amy Hoseth, Colorado State Univ. Lib., Fort Collins

At the start of this engrossing standalone from Edgar-winner Marwood (The Wicked Girls), Det. Insp. Merri Cheyne from Scotland Yard questions a young woman, Cheryl Farrell, about the grisly find of human fingers in a freezer inside a rundown boarding house located in a London suburb. As Cheryl confirms, the prints from those fingers belong to a fellow lodger, Lisa Dunne, who witnessed a murder and whom the FBI was seeking to interview. Dunne is not the only victim. Body parts from multiple corpses have surfaced in and around the boarding house, which turns out to be a destination for people with dark and embarrassing pasts that they wish to conceal. Meanwhile, the tenants must contend with break-ins, strange smells, loud music, hidden video-recording equipment in the bathrooms, and pipes clogged with a mysterious substance. Events converge to unite the lodgers in a mutual conspiracy, building up to a well-plotted ending filled with unexpected surprises. Six-city author tour. Agent: Laetitia Rutherford, Watson, Little (U.K.). (Oct.)