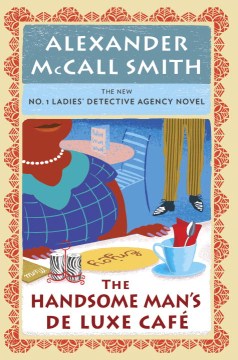 *Starred Review* Calling Precious Ramotswe, owner and chief investigator of the No. 1 Ladies' Detective Agency in Botswana, a detective doesn't do her justice. "Problem solver extraordinaire" would be much better. Mma Ramotswe takes on one or two true mysteries per novel, it's true, but she also treats a whole range of human difficulties as they come her way, finding good solutions through her wisdom, kindness, and tact. In this, the fifteenth in McCall Smith's hyperpopular series, the true mystery takes the form of a woman who appears to suffer from amnesia and is in considerable danger. Two other disruptions unsettle Mma Ramotswe's gentle routine of making bush tea in the morning and waiting for clients. Charlie, the girl-crazy, work-loathing apprentice to Mma Ramotswe's husband, who runs the garage adjoining the agency, is let go and quickly sinks into almost suicidal despair. Mma Makutsi, she who prides herself on receiving a 97 at the Botswana Secretarial College and is now Mma Ramotswe's copartner in the business, decides to open a café for fashionable people (the "Handsome Man" title is meant to target that demographic). Humor runs rampant, as always, except in the darkest situations. For example, the pride and prickliness of Mma Makutsi are always a hoot. McCall Smith's depictions of the sights and sounds of Botswana and his overarching theme of compassion make this novel radiant. HIGH-DEMAND BACKSTORY: The No. 1 Ladies' Detective Agency series remains the number-one attraction in the prolific McCall Smith's extensive oeuvre, and a new installment is always big news for the author's fans. Copyright 2014 Booklist Reviews.

Mma Ramotswe's next case: bucking up partner Grace Makutsi, who is overwhelmed by business demands and a lightning strike when she decides to try something different and opens the Handsome Man's Deluxe Café. The 15th installment in a venerable series; with a nine-city tour to Atlanta, Boston, Miami, New York, Los Angeles, San Francisco, Santa Barbara, Aliso Viejo, CA, and Seattle.

As usual, the problems that Precious Ramotswe tackles in Smith enjoyable 15th No. 1 Ladies' Detective Agency novel (after 2013's The Minor Adjustment Beauty Salon) are more the province of a therapist/counselor than of a cop. Mma Ramotswe's longtime assistant, Grace Makutsi, now a partner in their detective agency, hopes her good fortune will transfer to a new business venture, a restaurant whose name is the book's title. In the main plot line, the owner of a Botswana office supplies company retains the detective agency to help ascertain the identity of an amnesiac woman, whose uncertain status puts her at risk for deportation. Meanwhile, Mma Ramotswe's husband, Mr. J.L.B. Matekoni, must make a difficult business decision, but that only provides his wife with yet another chance to display her sympathy for almost every living creature. Series fans will be moved by a supporting character's growth, and newcomers will be charmed by the gentle humor. Nine-city author tour. Agent: Robin Straus, Robin Straus Agency. (Oct.)