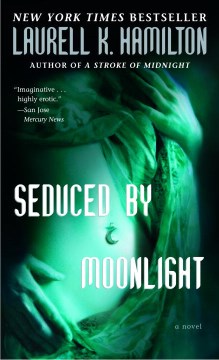 Last seen in A Caress of Twilight (2002), faerie princess Meredith NicEssus is still trying to conceive an heir so that she, and not her sadistic cousin Cel, can claim the Unseelie throne from her aunt, Andais. Luckily, Meredith has a bevy of buff bodyguards at her disposal, and the one who gets her pregnant will be king. She is also trying to broker the continuation of an alliance between the Unseelie people and the goblins, but the goblin king isn't cutting her many breaks. Her aunt is continuing to put increasing amounts of pressure on her, throwing more and more attractive men at her, hoping she'll produce that much-desired heir. Meredith journeys to her aunt's court, where a horrendous shock awaits her. Full of steamy sex scenes but a little light on plot, Seduced by Moonlight doesn't really pick up until Meredith heads to the Unseelie court. Despite the shortcomings, devoted Hamilton fans will enjoy the characters' connections and the rich, imaginative world they inhabit. ((Reviewed February 15, 2004)) Copyright 2004 Booklist Reviews.

Meredith Gentry, a mortal whose faerie blood has embroiled her in a race to produce the next heir to the throne of the Unseelie sidhe, finds that she constantly walks a fine line between her duty to her aunt, the Queen of Air and Darkness, and her own desire for a "normal" life. Filled with wild magic and given the gift to transform common faeries into noble sidhe, Meredith also discovers that she possesses other, heretofore unknown magic powers that seem to herald a return of the old gods of the sidhe. The third installment in Hamilton's Meredith Gentry novels (after A Kiss of Shadows and A Caress of Twilight) contains the same sultry eroticism while deepening the interrelationships among the principal characters. Hamilton's compelling storytelling makes this a good choice for libraries owning the series and for fans of adult fantasy tinged with horror. [Previewed in Prepub Alert, LJ 10/1/03.] Copyright 2004 Reed Business Information.

The popular series about Meredith Gentry, Los Angeles private investigator and faerie princess, continues with her evil aunt's efforts to assure that Merry has a child. Copyright 2003 Reed Business Information.

Considering all the complications, sexual and otherwise, that Merry Gentry, heir to the faerie throne, endured in A Kiss of Shadows (2000) and A Caress of Shadows (2002), it's no surprise to find the start of Hamilton's third book in her erotic fantasy series weighed down by attempts to conversationally recap earlier convolutions. Even readers of the first two books might have problems sorting out exactly why Merry is messing with the goblin king via magic mirror. Though the author maintains interest through such devices as an imaginative sex scene involving Merry, two of her sidhe studs and a doll-sized, winged, blood-sucking demi-fey, it takes a milieu switch from L.A. to St. Louis and the Unseelie court for the plot to take off and become a page turner. Merry confronts faerie politics that make Machiavelli look like a rookie, while her aunt's sadistic madness leads to what must rank as one of the bloodier scenes of fictional slaughter. Since Merry's previous role as a private eye has almost completely disappeared, nefarious deeds require magic to solve rather than detection. Hamilton's trademark mix of the personal and emotional along with the sexual will as usual delight her fans. Add yet another tour de force ending, a new final total of 16 lustful sidhe male immortals with whom to couple (or triple or...), and a fair future is assured for Merry for at least another few books. (Feb. 3)FYI: Hamilton is also the author of the bestselling Anita Blake vampire series (Cerulean Sins, etc.). Copyright 2004 Reed Business Information.

The pillars of the worldBishop, Anne

Daughter of the bloodBishop, Anne