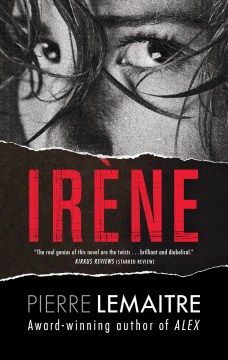 *Starred Review* The newest Camille Verhoeven title to be published in the U.S. is actually the first in the dark and complex French series. Verhoeven is a commandant in Paris' Brigade Criminelle. He compensates for his small stature (four-feet, eleven-inches tall) with an enormous intellect (although he is short of temper, too). He is only able to let his guard down at home, where his pregnant wife, Irène, is expecting their first child. But a grisly case is keeping him at the office most nights—a serial killer the press is calling the Novelist is re-creating some of the most brutal crime scenes from classic mysteries. Verhoeven's team is tearing apart a recent murder-scene tableau and looking into cold cases to find similarities to well-known crime novels. Verhoeven is able to establish communication with the killer by appealing to his literary leanings. These letters reveal the scope of the killings and hint at what the killer is plotting as his "masterpiece." Alex (2013), Lemaitre's first novel to be translated into English, won the CWA International Dagger Award for best crime novel of 2013. Verhoeven is a one-of-a-kind detective, and Lemaitre does an excellent job surrounding him with characters who demand their share of the limelight. Not for the faint of heart, this gritty thriller will appeal to fans of Chelsea Cain, for the grisly details, and Fred Vargas, for the French setting and iconoclastic sleuth. Copyright 2014 Booklist Reviews.

French literary sensation Lemaitre earned comparisons to Stieg Larsson (and a 2013 CWA International Dagger Award) with Alex, a gruesome and twisty mashup of police procedural, thriller, and psychological horror. Its newly translated predecessor might be even better. (Though Alex is Lemaitre's first book translated into English, Irène originally introduced his protagonist, diminutive investigator Camille Verhoeven of the brigade criminelle of Paris.) The hook is irresistible: Verhoeven's on the trail of a serial killer who stages grisly murder scenes that pay homage to famous books. Dubbed "The Novelist," the killer decapitates prostitutes à la American Psycho, butchers a woman in the style of The Black Dahlia, and dumps a body along a river in echoes of Maj Sjöwall and Per Wahlöö's Roseanna. But Lemaitre's own crime story is hardly predictable, as he pushes the pulse-quickening plot toward an ingenious—and shocking—finale. VERDICT Know any Euronoir readers who can stomach ultraviolence? This is the book for them. Just be aware that the "Camille Verhoeven" trilogy works best in chronological order, as some of the dark surprises here are spoiled by its previously released sequel.—Annabelle Mortensen, Skokie P.L., IL

Lemaitre's chilling first novel, the second to appear in the U.S. featuring Commandant Camille Verhoeven after 2013's Alex, finds the Parisian policeman enjoying the professional and personal contentment he never knew was possible. He and his squad are a well-oiled machine, but more importantly, he is happily married to Irène, who is pregnant with their first child. But a murder of unfathomable brutality, followed by another, puts Camille's career on the line. The murderer, nicknamed the Novelist by the press, appears to be reenacting scenes from crime novels. As the killings escalate, scrutiny of Camille by Philippe Buisson de Chevesne, a journalist with a personal vendetta against him, adds to his woes. Lemaitre slowly reveals the cracks in Camille's police team while dismantling the detective's life at home. The plot is unfailingly intriguing, though some readers may wish Lemaitre had lavished less grisly detail on the crime scenes. (Dec.)